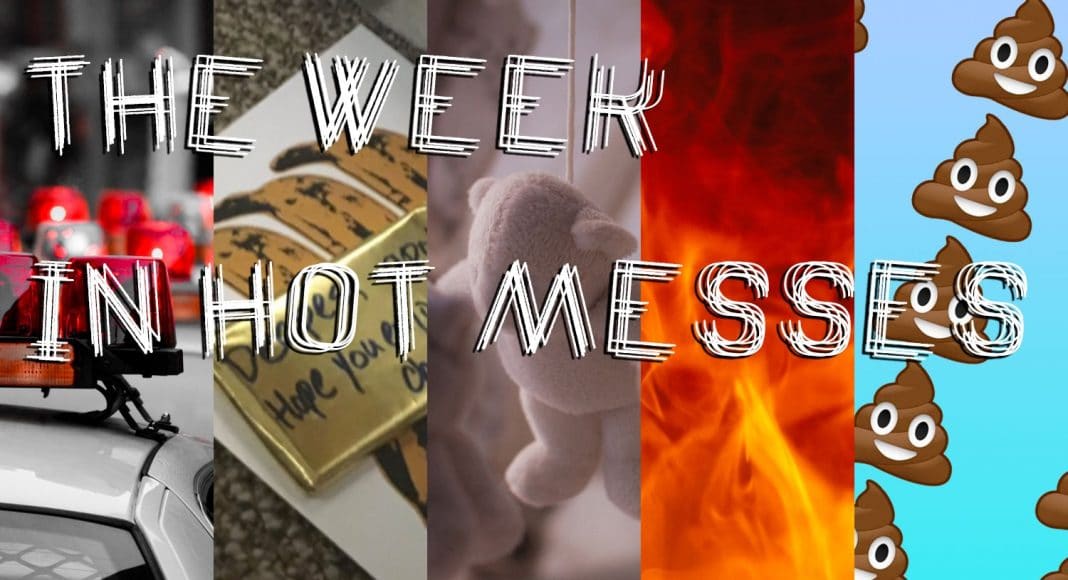 In Florida, the Mecca of Hot Messes, an 18-year-old allegedly drank five beers in the store’s beer aisle before confessing her crime to the store’s manager and then grabbing a paramedic by the balls. But before judging her too harshly, you should know that she reportedly apologized as she was put into the squad car.

Meanwhile, in Utah a woman says an airplane dumped human poop all over her driveway and car.“It’s like they dumped all the poop out of the airplane and it landed in my drive way,” she said in a Facebook video. “It’s all poop. Human poop…It’s on my car. Splattered everywhere.” Making matters worse: The woman says this isn’t the first time an airplane has dropped feces onto her property.

In nearby Wyoming, a couple of teenagers made headlines for riding their horses into town and through a McDonald’s drive thru…all while their pet goat, appropriately named Goat, followed behind on foot.

And back in the good ol’ USA: A Texas woman filed a lawsuit after she received unwanted penis-shaped candies in the mail from a company called Dicks by Mail. And a man was arrested in Wisconsin for allegedly jumping onto the hood of a police car, where he reportedly proceeded to do the dance known as “the worm.”

Facebook
Twitter
Linkedin
Email
Print
Previous article10 Perfect Examples of How Scottish Twitter Could Save Social Media
Next articleCongress, Marijuana And PTSD: The State Of The Debate