Artist Robert Crumb created the famous Keep On Truckin’ image and the X-rated Fritz the Cat. The highest price paid for his work was $717,000 in May 2017.

Marijuana millionaires or even cannabis companies flush with public money may have the chance to buy a rare R.Crumb piece of art titled “Stoned Agin.” The iconic comic art will be available for the first time ever in Heritage Auctions’ Comics & Comic Art Auction Nov. 21-24 in Dallas, Texas, and is expected to go for over $250,000.

Heritage Auctions described it as the “Holy Grail” among serious collectors of artwork by the iconic Crumb and dates back to 1971. Robert Crumb was part of a group of counter-culture artists in the last 1960s and early 1970s located in the San Francisco Bay Area. He created the famous Keep On Truckin image and the X-rated Fritz the Cat. The highest price paid for his work was $717,000 in May 2017, which was a cover he did for the Fritz the Cat book dated in 1969. 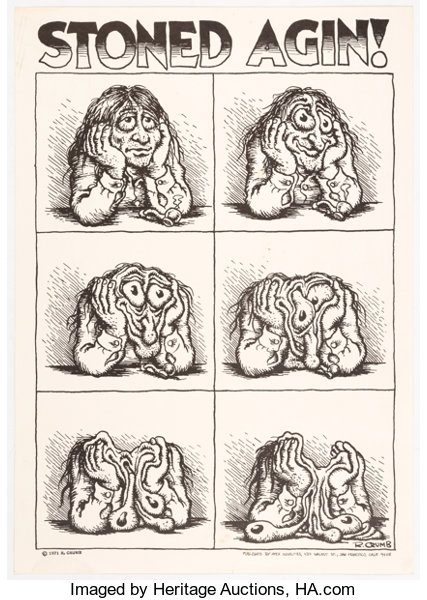 “The consignor received the artwork directly from Robert Crumb,” Heritage Auctions Senior Vice President Todd Hignite said. “After moving to Northern California in 1970 and getting to know Crumb through friendships with other underground cartoonists, a trade was arranged with the artist, swapping some rare old blues 78 records for the artwork. The original has remained in our consignor’s personal collection ever since, buried away and securely stored for more than four decades, which has only added to the appeal and demand among collectors. This art is not only the great “lost” Crumb but an incredibly key image for the 1960s and 1970s counter-cultural history. Such powerful images that have been seared into the imaginations of so many very infrequently come up at auction.”

Hignite thinks that the declining stigma around cannabis has increased broader interest in Crumb’s work. “Personally, I can’t imagine a piece of artwork that would appeal more to cannabis entrepreneurs,” said Hignite. He expects a great deal of interest in this particular piece as it is considered an iconic image from the era. “Thousands of copies hung in dorm rooms and head shops around the country,” he added.

Heritage Auctions has sold Crumb’s work for the last 20 years. The company noted that this art is in ink on Bristol board, with an image size of approximately 12 by 8 inches on paper measuring 13-7/8 by 10-7/8 inches. The artwork is even accompanied by the cardboard portfolio in which Crumb delivered the artwork; the portfolio has a handwritten “to do” list in pencil, possibly written by Hytone publisher Don Donahue.

Facebook
Twitter
Linkedin
Email
Print
Previous articleMeme Of The Week: Flounder From ‘The Little Mermaid Live’ Gets Trolled By The Internet
Next articleStarz Is Developing A ‘Weeds’ Reboot For The Legalization Era

Prior cannabis convictions can lead to longer sentences.

Vapes Could Be The Big Winners In New York

This City Just Kicked Off Adult Use Cannabis Sales