For now, there’s no country in the EU that allows for the legal production, commercialization, and consumption of adult-use cannabis. Things, however, are just beginning to move on the Old Continent.

Adult-use cannabis legalization is picking up pace in the Americas. On Wednesday July 14, Senate Majority leader Chuck Schumer released a draft bill that would federally legalize cannabis in the United States. Earlier this year, New York joined the ever-growing collection of US states in which adult-use cannabis is already fully legal. Last June, Mexico’s Supreme Court ruled that the government should legalize the recreational use of cannabis, bringing the country a step closer to becoming the largest legal market for adult-use cannabis in the world.

And Europe? It’s still lagging behind. For now, there’s no country in the EU that allows for the legal production, commercialization, and consumption of adult-use cannabis. Things, however, are just beginning to move on the Old Continent as well.

There are a few governments that are taking the first tentative steps towards legislation that allows for adult cannabis use (at least on a trial basis). June saw two political parties in Portugal — Left Bloc and Liberal Initiative — each present proposals for the legalization of adult-use cannabis. The outcome of the debate was an agreement that both bills be sent to the Health Committee for a period of 60 days, during which public hearings can be made, amendments presented, and negotiations carried out before the deciding vote takes place in Parliament.

RELATED: Updated Guide To Cannabis Laws Around The World

Luxembourg, Switzerland, and The Netherlands have all passed regulations to get the ball rolling in the legalization process. In Switzerland and the Netherlands, new laws allow for the initiation of pilot schemes wherein cannabis can be legally produced, imported, and distributed to registered users. It is likely that these pilot projects will be underway, with products on shelves within 1-2 years. This will make the two countries the first to de facto allow for a fully legal supply chain for adult-use cannabis.

If the legalization process continues as expected, Portugal — along with other European countries like Spain, the Netherlands, Luxembourg, Germany, Switzerland, and Malta — may be on course to introduce legal access to adult-use cannabis within the next few years.

What will be the effects of legalization?

The potential effects of the legalization of cannabis in Europe are far-reaching and significant. From an economic, social, political, and medical perspective, the opportunities created by legalization could be transformative. Let’s take a look at a few now.

Firstly, let’s examine the potential commercial impact of cannabis legalization in Europe. Put simply, the potential market for adult-use cannabis is huge. A whopping one in ten Europeans smokes cannabis every year, while a quarter of people admit to having used cannabis at least once in their lifetime. The annual sales in illicit market cannabis are estimated at around €11 billion.

RELATED: Legalization In Latin America: Who’s Next After Mexico?

It appears likely that many countries will focus on developing infrastructure for the domestic production of adult-use cannabis. This is the course that Switzerland and the Netherlands are charting in order to allow for tighter oversight of all stages of the supply chain and maximize the amount of tax revenue.

Although fragmented legislation might somehow be a hindrance to the market reaching its full potential quickly, the gradual legalization of adult-use cannabis will mark a significant turning point for the industry and opportunities will arise as a result. As highlighted in The European Cannabis Report: 6th Edition, we project that sales of adult-use cannabis will reach €200 million by 2023, coming close to €800 million in 2025.

To put these figures into context; when cannabis was legalized in Canada, the illicit market for cannabis was worth €800 million. It took just two years for the legal adult-use cannabis industry to take away half of the market share. 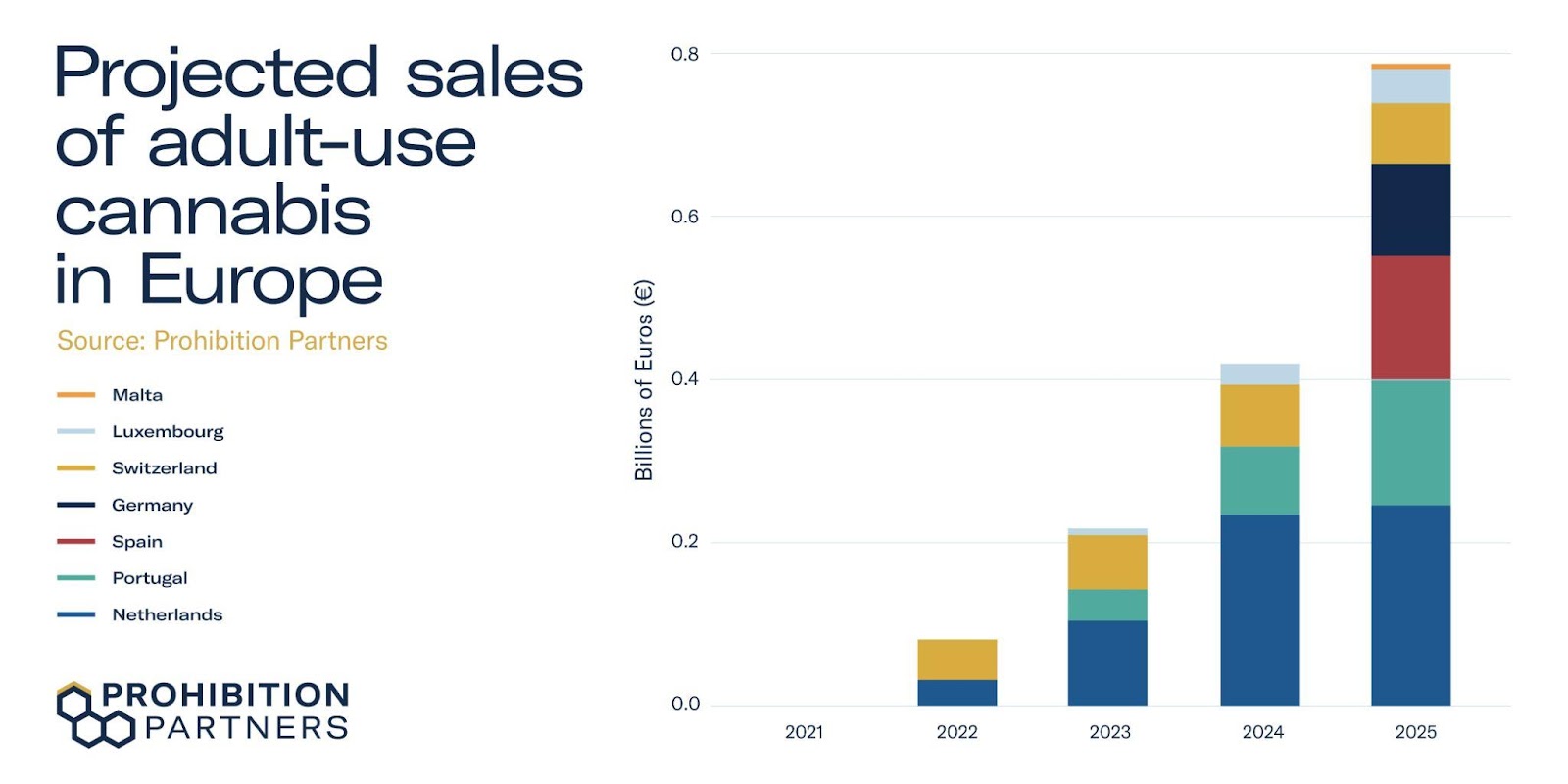 Product differentiation will be a natural outcome, as we’ve seen in the US and Canada. There are a number of ways cannabis can be consumed for recreational purposes, many of which are currently made impossible by prohibition.

This diversification could lead to an increase in cannabis usage more broadly – many people are, after all, put off by the illegality of the business and the lack of alternatives to smoking flowers. The drive to satisfy the diverse needs of consumers will involve a wide variety of sectors. Those most likely to play a role are consumer goods, food, and healthcare. Profitable investment opportunities will be available to essentially create a functioning value chain from scratch.

A plethora of medicinal uses

The legalization of cannabis across Europe will not only create a new market but will also have a significant impact on the medical side of the industry. The relationship between these two segments has indeed always been a controversial one.

In the US, medical cannabis has occasionally been used as the basis for wider arguments about the legalization of adult-use cannabis. We’ve all seen the photos of medical practices in areas like Venice Beach offering quick prescriptions for cannabis for a few dollars. This practice has helped to normalize cannabis use, while also damaging the image of cannabis as a medicinal product.

The situation is very different in Europe, where medical and adult-use cannabis have largely remained separate issues. Cannabis is permitted in many countries for medical purposes, while recreational use still carries a stigma and is largely left to the illicit market.

However, it can be expected that the legalization of adult-use cannabis will have an impact on the medical cannabis market in Europe. One likely effect is the increasing medicalization of these cannabis markets. Patients and doctors will increasingly move away from the flower — still predominant in Europe — and towards products like extracts, edibles, and the more refined pharmaceutical products which align medicinal cannabis to more traditional medical practice.

This is a natural process, but also one that will be necessary for the pharmaceutical cannabis industry to evolve. As more and more patients will be able to find satisfaction for their consumption needs elsewhere, medicinal cannabis will need to differentiate its offering. A similar trend can already be seen in a more mature market like Canada, where the opening of adult-use cannabis stores has put the total number of registered patients on a downward trend. 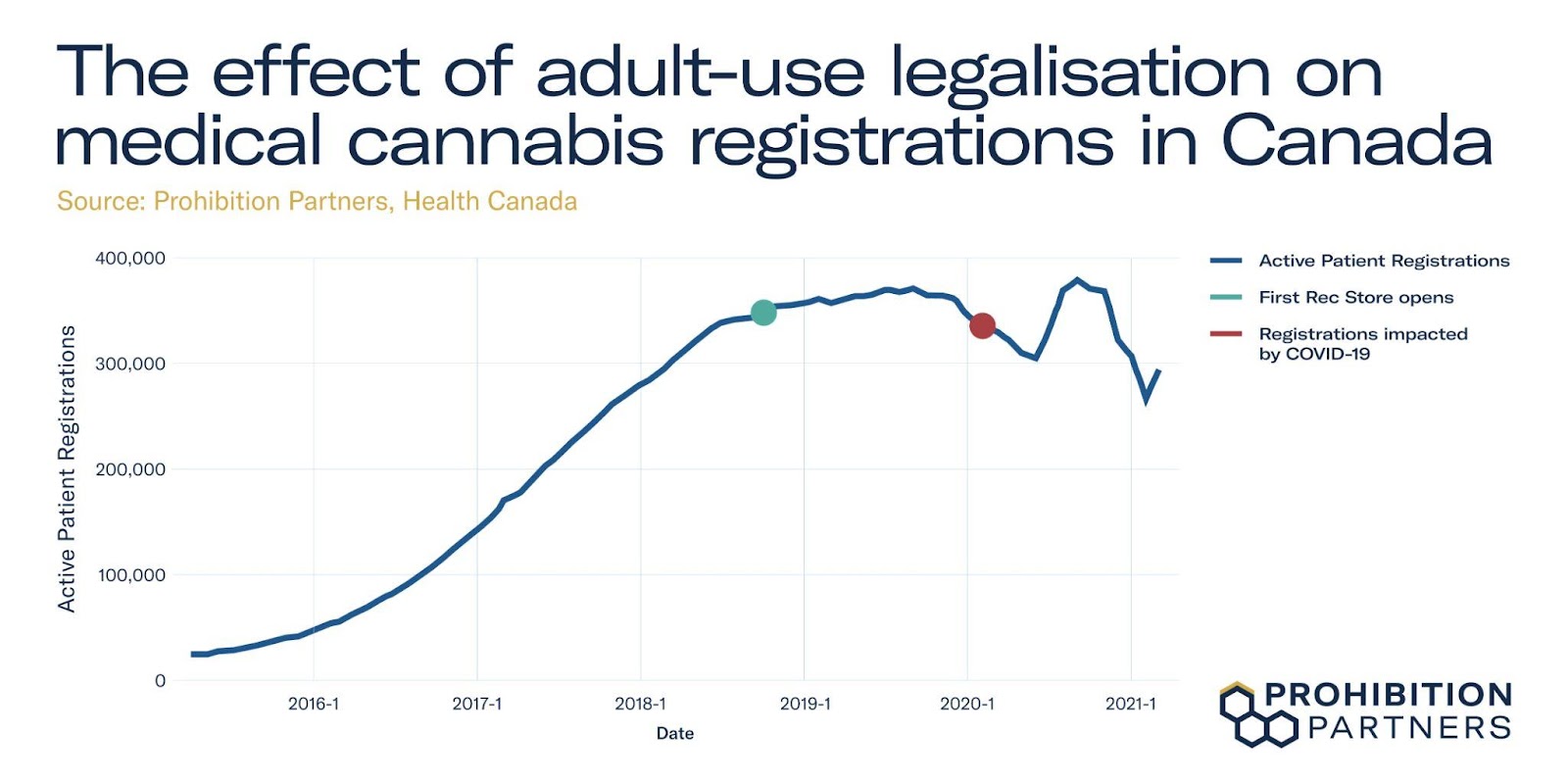 Finally, the recreational legalization of cannabis is almost certain to bring with it further normalization and social acceptance of cannabis across Europe, fanning the flames of a market that is already set to grow exponentially over the next few years (we project it will be worth more than €3 billion by 2025). As with anything, the social stigmas attached to cannabis are largely borne out of its illegality and have begun to be stripped away as countries move towards legalization.

It’s also entirely possible that countries will begin to see the political and legislative benefits of legalization, leading other governments to follow suit. Countries that go down the legalization route are likely to feel the immense benefits of direct revenues through taxes and a significant reduction in pressure on the judicial system. Colorado, a state with an economy the size of Norway’s, sold $1.6 billion in cannabis in 2020 and is an industry that is supporting the creation of thousands of jobs, reviving the economies of many communities.

Legalization is unlikely to completely transform the market with one clean sweep. It’s much more likely that countries will gradually adopt a hybrid solution or implement new legislation in increments. This is, however, a story we’ve seen time and time again. When we reach a legislative tipping point, change comes thick and fast.

We may not see a European country legalize recreational cannabis this calendar year, but the process is underway and it’s difficult to predict how quickly things will move when they do. For anyone hoping to ride this wave, now might be a good time to start preparing.

Barbara is a leading expert on the international cannabis industry. She has done substantial work on emerging cannabis markets such as Europe, Latin America and Africa. Barbara heads Research & Consulting in Prohibition Partners, the leading source of market intelligence, data and strategy on the global cannabis industry.

Barbara has extensive experience in managing and executing strategic consulting projects in a variety of heavily regulated sectors ranging from Oil & Gas to transportation and FMCG. Previous to Prohibition Partners, she covered various positions in General Electric, Wood Mackenzie and KLB Group. Barbara is a graduate in Political Science and International Relations from LUISS University and holds a MSc in Petroleum and Energy Economics and Finance from the University of Aberdeen.

To get in touch with Barbara, you can email her directly: barbara@prohibitionpartners.com