“We feel that we can use our unique platform with our cannabis consumers to let them know that there are tons of amazing dogs out there that are ready for a caring home.”

Dogma Cannabis is a cannabis company that has a unique mission to raise awareness about animal shelters and help dogs in California get adopted. Dogma Cannabis was launched by cannabis entrepreneur Geoff Doran in September 2020 and is currently in 3 strategic shops, with plans for a fourth in December. Dogma will be launching its “ready to roll” product in January in addition to the half ounces that they currently have in the California market.

The brand, which is part of the Van Doran portfolio, wants to change the way current cannabis consumers use cannabis by introducing outside of the box products for the consumer that is active, on the move and likes to give back to a cause. The company will be donating a portion of its profits to animal shelters in California.

“Over the last 6 years I have successfully helped launch dozens of brands in the Cannabis industry in California and Colorado. After I acquired two licenses, I finally decided it was time to launch my own brand that had a focus on a cause that I care a lot about. That happens to be animals. It all started after being inspired by a famous individual from my hometown of Springfield, MO,” said Van Doran Brands, CEO & Founder, Geoff Doran.

“That individual was Bob Barker. I met Bob when I first moved to Los Angeles, CA after writing him a letter upon graduation from college. He was actually the first person to give me a shot at an interview right out of college. After that meeting in 2006, I told myself I’d eventually try to give back to animals just like he had done so famously over his career. So with Dogma, I am now able to intertwine two things I care about which is the Cannabis Industry and Animals.” 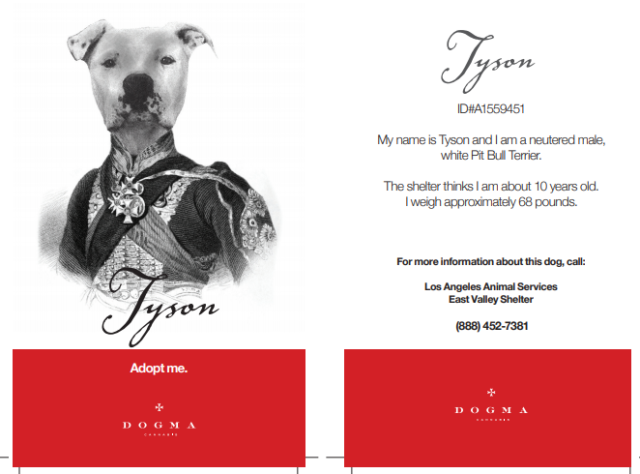 Doran uses postcards that feature adoptable dogs as a way to promote the brand and also bring attention to the problem facing California dogs. Dr. Kate Hurley, director of the Koret Shelter Medicine Program at UC Davis told KQED in January that an estimated 100,000 animals are euthanized each year in California. Best Friends Animal Society is a nonprofit organization that operates the nation’s largest sanctuary for homeless animals. The organization said California shelters took in 715,000 cats and dogs. Of those, 111,000 were killed. Only Texas (114,000) killed more cats and dogs.

Dogma Cannabis officially soft-launched in September with 3 strategic dispensaries in Southern California to test the branding and initial products. “All of our Dogma Cannabis products have been designed to allow our consumers to get a premium flower at a really good price,” said Doran. “In addition to our current products, we will be sticking to the overall cause which is to help animals get adopted.

RELATED: The Relationship Between CBD And Owning Pets Is Deeper Than You Think

“In order to accomplish this, we will be handing out our signature Dogma baseball cards to retailers and consumers to get the word out about adoptable dogs in the Southern California area. We feel that we can use our unique platform with our cannabis consumers to let them know that there are tons of amazing dogs out there that are ready for a caring home.”

If cannabis consumers have a choice between buying plain cannabis versus one that will help these poor animals in shelters, surely they will choose Dogma.

Marijuana vendors testified at trial that “they felt forced to pay Jasiel Correia a bribe if they wanted a license to operate in Fall River.