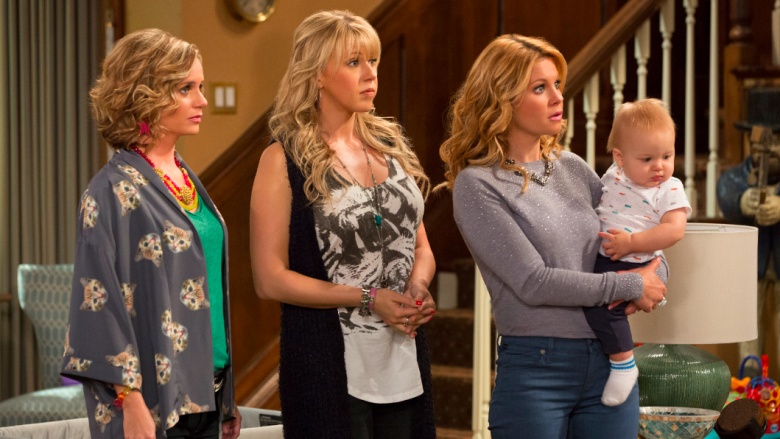 On “Today,” co-host Hoda Kotb asked Bure and “Fuller House” costar Jodie Sweetin about their co-star Loughlin, who’s accused with her husband of paying $500,000 so their daughters could pose as crew athletes to get into the University of Southern California.

RELATED: Chris Evans Has ‘Chilled Out On Weed,’ But Not Acting

“It’s too personal to us, and we would never want to talk about someone that’s such a dear and close friend,” Bure said. “I’ve already said that we are family and we stand by each other and pray for each other and we’ll always be there for each other.”

While accepting an award at last week’s Nickelodeon Kids’ Choice Awards, Bure did not mention Loughlin directly, but did say that “a loving family sticks together no matter what.”

Some interpreted the remarks as an expression of solidarity with Loughlin, who turned herself in last month and was released on a $1 million bond.

“Full House” costar Bob Saget, who also appeared on “Fuller House,” later referred to Bure’s Kids’ Choice Awards statement, telling TMZ, “you love who you love in your life … Life’s complicated.” John Stamos, another castmate, said he didn’t want to talk about it.

The pop star was clearly trying to tap into the spirit of April Fools’ Day with a series of leading Instagram posts, but his jokes sparked criticism from followers who were quick to note that the prank isn’t exactly hilarious to people struggling to become parents.

“PREGNANCY IS NOT A JOKE! There are MILLIONS of couples who are struggling with infertility and would do anything to have a child,” one person wrote on social media.

“Of course justin bieber will think a pregnancy announcement would be funny on April fools. esp so when 1 in 7 women have had a miscarriage. not to mention those suffering from infertility,” another Twitter user said.

RELATED: Meghan Markle Has A New Palace Nickname And It’s Not Flattering

“I’ve never been mad at @justinbieber but today I’m disappointed in him for posting a fake pregnancy announcement,” another fan wrote. “Honestly, not a funny joke when millions of women are struggling with infertility and other issues of the sort. Sad, @justinbieber.”