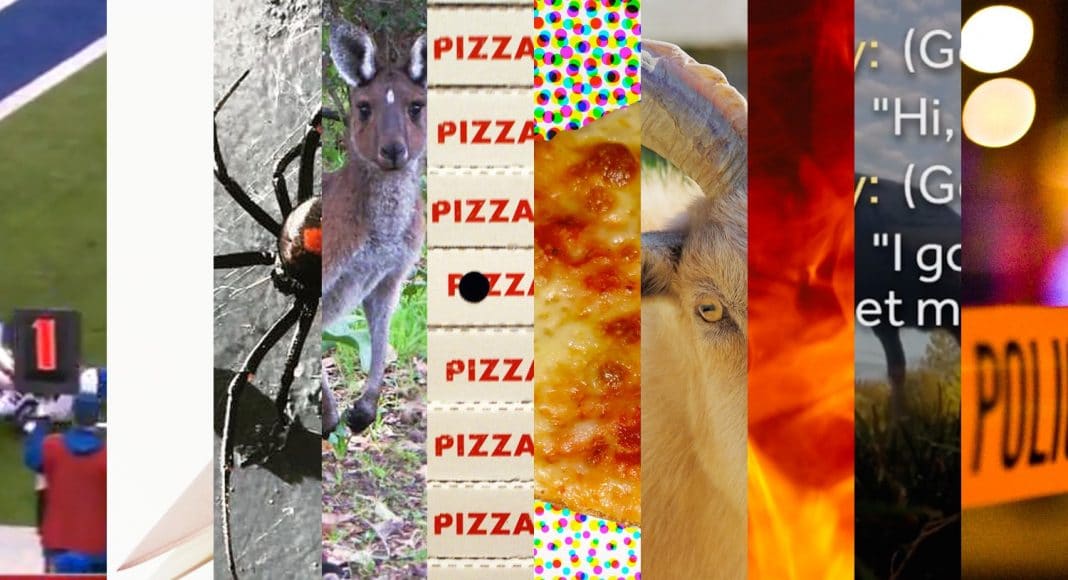 9. Woman Stabbed by Her Own Dog

Sometimes man’s best friend can also be man’s worst enemy, even if the dog is a good pup like Mia. This fall, Mia grabbed a pairing knife from her owner Celinda Hayne’s kitchen counter with her mouth and thought Haynes was playing when she tried to retrieve it from her. When Haynes tossed Mia a treat to distract her, Mia accidentally stabbed Haynes in her enthusiasm, leaving a four-inch gash behind. Luckily for Mia, local police decided not to press charges against her because she’s a dog.

8. Man Bit on the Penis By Venomous Spider Twice in One Year

In April, an Australian construction worker named Jordan was bit on the penis by a redback spider while using the toilet at a job site. Five months later, another spider–believed to be a redback spider–bit him on the penis while he was using the toilet at a different job site. I’m the most unlucky guy in the country at the moment,” he told the BBC after the second bite. We agree.

7. Man Punches Kangaroo in the Face to Free a Dog

Not a ton is known about this man who jumped from a pickup truck, ran up to a kangaroo holding a dog in a headlock, and punched the kanga right in the dang face. But we do know that he’s a hero

6. Woman Slaps Bouncer After He Refuses Pizza ID and 5. The Naked Pizza Bandit

No Year in Weird Crime piece would be complete without some serious pizza crime, and this year didn’t disappoint. First, there was an underaged college student who slapped a bouncer for the crime of refusing to accept a slice of pizza as valid ID. Then there was the Maryland man who broke into a pizza parlor, stripped off all of his clothes, and then robbed several registers.

4. The Man Who (Allegedly) Fucked His Goat

Georgia is the wonderful state in which I was born. It’s also the state where, this summer, a man was arrested after his neighbors spotted him “having intercourse with a goat.” The man was charged with bestiality and faces five years in jail if convicted.

In Japan, a patient was burned and a hospital room was slightly damaged when the patient farted during surgery near a laser, igniting the flammable fart gas.

My personal favorite story of the year is the tale of Downtown Tom, the aggressive turkey of Davis, California. If you’re trying to use a bank in downtown David, you better watch out for this territorial bird.

Who among hasn’t drunkenly crashed into a parked police car while posing for a topless selfie to send to our significant other?

Facebook
Twitter
Linkedin
Email
Print
Previous articleWha? 7 Of The Strangest And Most Random Moments Of 2016
Next articleTFT Asks: Marvel’s Civil War II Is Over, But Should You Read The Tie-Ins?