The Fresh ToastThe most trusted name in cannabis
More
HomeHow-ToHow To Decarb Cannabis, According To Pros

How To Decarb Cannabis, According To Pros

For many people, the task seems daunting and I’m not going to sugar coat it. The first time you attempt it by yourself you’ll be questioning your actions every step of the way.

When you decarboxylate cannabis, you’re essentially applying heat to activate the cannabinoids and convert them from their acid form into their psychoactive state. For example, turning THCa into THC.

If you were to skip the step of decarboxylating your cannabis, your infusion would lack in potency and would in most cases not live up to your expectations. But what’s the right time, method, and heat settings to get the perfect decarbed weed?

That’s what we’re about to find out in this article right now. Not only are we going to be talking about the right temperature and time, but also providing you with different methods of decarbing your weed. This should provide you with everything you need to know to start experimenting with cannabis infusions. Let’s get ready to bake!

Decarboxylating Your Weed the Right Way

Depending on the sources you find on the internet, there’s many ways to decarb your weed. The most common method is using the oven and some oven-ready trays.

Conventional wisdom says to put it in a preheated oven at about 250º F (122ºC) for about 30-minutes and this is entirely a correct assessment.

RELATED: A Simple Explanation Of Cannabis Decarboxylation And How To DIY

But why would you play around with temperature in the first place? Wouldn’t following the “rule of thumb” be enough to get consistent decarboxylations on the cannabis?

Of course it would!

The reason you want to play around with time and temperature settings is because some terpenes and flavonoids are sensitive to the heat.

RELATED: This Is What You Need To Do To Marijuana Before You Can Make Edibles

We’ll talk more about preserving your terps during the decarboxylation process a bit later on.

Depending on the purpose of your decarb-ed weed,  by following the chart you should have a more precision with your process. 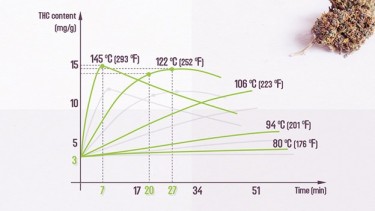 The Process of Decarbing

Let’s first go over the most common method — using the oven.

This is pretty straight forward.

You’ll preheat the oven at the desired temperature. We’ll say 250ºF for this example. While the oven is heating up, you’ll begin to break up the cannabis into small chunks. Don’t grind it; simply break it up finely, but not too much either. Small chunks should do.

Lay these chunks on some baking paper, evenly. Then, place it in the oven and let it cook for about 25-30 mins.

The weed should turn from green to a light brown. Once this has been achieved, you’ll carefully remove the tray and let it cool for a bit.

The weed will now be breaking and crumbling rather easily. So be careful!

Your weed is now ready to be infused.

The other method is to use a double boiler.

You’re essentially following the same basic principles, except the cannabis would be in a jar with a lid, that will allow it to trap in a lot of the terpenes

A double boiler is essentially a stovetop method for decarbing. You’ll have a pot with some water in it; roughly a quarter of the pot should be filled.

Then, you’ll place another pot on top of it, creating a sort of seal between the two pots. The steam from the water below will evaporate and will heat the pot above it.

This gives you a controlled heat of about 212 degrees F or 100 degrees C. Based on the chart below — also from Green Camp — shows you that at that temperature you’ll be cooking it for about 90-120 minutes. 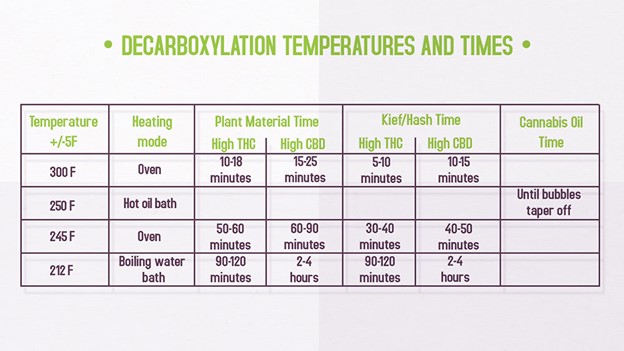 By placing a lid on the top boiler — perhaps with a little opening — you’ll be able to trap in a lot of the other gases that get rereleased when heat is applied. These are terpenes, flavonoids, etc.

Once the THC is activated, and the vapor settles in the second boiler, the terps and flavonoids will recombine with the weed, increasing the taste profile of the decarb.

RELATED: I Used A Decarboxylator To Make Weed Beer And It Was Amazing

This comes in especially useful when you find aromatic buds. Take a blueberry strain or some lemon haze and infuse that with your favorite desert. You’ll absolute love it.

Your edibles can take on a whole new life if you understand the subtle chemistry behind all of this. The best teacher however, will always be experience.

If you’ve got some weed, it’s time to start experimenting!

Can I Store Decarbed Weed?

Sure, but it will only continue to degrade over time. It’s probably best to use it as soon as it is ready to be used.

If you’re thinking of storing weed, rather store it as fresh herb. The decarboxylation process continues with time. In fact, leave it for long enough the weed will completely decarboxylate on its own.

It may take months in some cases! Who’s got time for that!

It’s not recommended to store already decarbed weed simply because it will continue to degrade until it becomes non-viable.

Making infusions is a science that many people enjoy! It’s just as addictive as growing weed, and when you begin to process your weed according to your own desire, cannabis takes on a whole new level of awesome!

For many people, the task seems daunting and I’m not going to sugar coat it. The first time you attempt it by yourself you’ll be questioning your actions every step of the way.

I’ve left weed in the oven until it was blackened and smoky. It happens to all of us at some point.

All you got to do is get out there, experiment, make your own infusions, and learn the craft of bringing depth to your cannabis activities.

I hope this article inspired some confidence in your interest to start making your own infusions. Trust me, it’s worth the learning curve!

This article originally appeared on Cannabis.net and has been reposted with permission.

Facebook
Twitter
Linkedin
Email
Print
Previous articleReturning To The Gym? Here’s What You Can Do To Feel Safer
Next articleMarijuana Has Different Colors — Does This Impact Its Effect?

How Long Do Marijuana Edibles Stay In Your System?

Edibles need to be used responsibly, especially when the dominant cannabinoid in the product is THC.

The Perfect CBD To THC Ratio? This Is What A New Study Suggests

Do You Know The Difference Between Cannabis Strains, Phenotypes, And Cultivars?