2021 gave us lots of doozies when it came to weed news, from the Olympic ban a sports superstar to giving us hope that Republicans will come around to legalization.

Given the activity in the news cycle during 2021, some of the more hard to believe or impractical news stories may have flown under your radar. A surprising number were cannabis related in one way or another.

As the stigma around cannabis continues to evolve, it’s safe to assume that the most surprising cannabis-related news stories of 2022 will make this list seem like child’s play. Here’s a small sampling of some of the more unexpected weed stories of the year.

5. Most Massive Marijuana Brownie of All Time Unveiled by Scientists

When it comes to marijuana edibles, it’s fair to assume that as of 2021 most cannabis enthusiasts have seen them all at this point. That was likely the case before Massachusetts-based cannabis company unveiled an 850 pound cannabis–infused brownie on National Brownie Day. The company produced the supersized stoner snack to draw attention to its new brand of edibles called Bubby’s Baked. 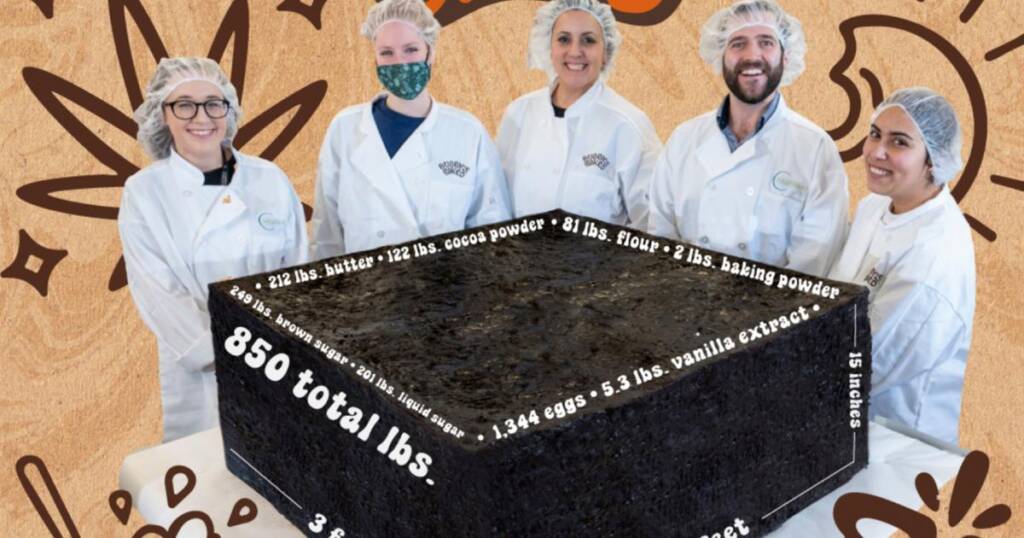 The edible contains 20,000 milligrams of THC and measures in at 3 feet wide and 3 feet and 15 inches tall. The previous record for the largest brownie was set at 243 pounds. Needless to say the record set by the Bubby’s Baked brownie is likely to remain in place for some time.

4. Marijuana Use Among Teens Falls in Midst of Reforms

When it comes to the legalization of recreational cannabis, one of the biggest objections proponents dealt with from opposition was that youth consumption would increase. The early results show those concerns have been disproven to say the least. Over the course of 2021, teen cannabis use dropped from 11% down to 7% for eighth graders.

For 10th graders, rates of marijuana use fell from 28% to 17%. There are numerous factors that could have contributed to the decline in teen marijuana use like school shifting to remote learning which takes away from peer pressure. Taking that into consideration, rates of teen marijuana usage will continue to be something to watch heading into 2022.

Jaleel White may be best remembered for the time he spent on television as Steve Erkel, but cannabis enthusiasts will be associating him with something totally different pretty soon. That’s because back in April he made the decision to launch his own cannabis line called ‘itsPurpl’. He partnered with 710 Labs to launch the strain throughout California back on April 20th, more affectionately known as 420.

Among his motivations for starting the cannabis brand, he said he hopes to debunk stereotypes associated with cannabis and celebrate medical breakthroughs too. He hasn’t been the only celebrity to get involved in the cannabis industry in recent years, so it’ll be interesting to see which celebrities follow his footsteps in 2022 by starting their own cannabis brands.

2. Sha’Carri Richardson Suspended From Summer Olympics Over Cannabis Use

American track sensation Sha’Carri Richardson stole the nation’s heart this summer after qualifying for the Olympic Games in Tokyo. Her charisma and style was reminiscent of Florence Joyner back in the 1980s, so to say she had the support of both casual fans and die-hards of the sport would be an understatement. That’s why spectators couldn’t believe the IOC banned her from the Olympic Games after returning a positive test for THC.

Sha’Carri claimed she used cannabis to help cope with the stress of losing her mother, but that didn’t matter to the IOC as they continued to ban her for one month as a punishment which barred her from competing in the games. The outcry that resulted from her being banned from the games didn’t allow her to compete, but did raise enough attention that allows fans of the Olympics to hold out hope that they will eventually reverse their stance on cannabis use among athletes.

Among the most surprising weed related headlines to reach news sources during 2021, the one most likely to cause readers to do a double-take is that 54% of republicans now favor federally legalizing cannabis.

The support republicans have for the federal legalization of marijuana could lead to an entirely different landscape for cannabis consumers and investors in 2022 and beyond. That’s the case because republican lawmakers could begin to increase the pressure on President Biden to enact cannabis-friendly legislation sooner rather than later.

RELATED: Experts Predict These Countries Will Legalize Cannabis In 2022 (The US Is Not Among Them)

There are already numerous bills that have been introduced by Republicans that would federally decriminalize and tax marijuana. Receiving scrutiny from both sides of the aisle could be exactly what it takes for the Biden administration to make much-needed legislative changes to federal cannabis laws.

Facebook
Twitter
Linkedin
Email
Print
Previous articleWhere Is Weed Cheapest And Most Expensive In The US?
Next articleThe Cannabis Industry Grew During COVID, Against All Odds: Here’s Why You Should Invest

There are numerous Black pioneers within the world of cannabis that have made an immeasurable impact.

What To Know About Weed In The Workplace In 2022

DC, Maryland, Virginia: Where And How Congress Can Buy Marijuana