You Won’t Believe Which Generation Spends The Most On Marijuana

We’ll give you a hint: it’s not millennials. Plus, women and men prefer different cannabis products, but not in the ways you’d expect.

If you had to guess which age group spends the most money at dispensaries, what would your answer be? The safest choice would probably be millennials, who account for over half of all legal marijuana sales and maintain sizable disposable incomes. But you’d be wrong.

As it turns out, the older the generation, the more money they’ll spend on weed. Never would you assume that those ages 76-years and older would drop the fattest stacks buying marijuana, but that’s where we are in the legal cannabis era.

That news comes courtesy of Headset, a data and analytics firm that specializes in the cannabis industry. Their latest report focused on major marijuana buying trends, but ended up revealing more about preferences among generations and genders. While many prognosticators will share general assumptions about consumption preferences between men and women, the data says something a little different.

For example, a commonly held belief is that women choose wellness products at a far higher rate than men do. This is mostly true, according to Headset’s data, with women spending the majority of their cannabis dollars on topical, capsules, tinctures and sublinguals, as well as edibles. But as it turns out, men love these products too. All four of those categories show close to 50-50 splits between the percentage of total sales among men and women.

In part, that’s due to men spending more money overall on cannabis products, accounting for 60% of all sales at marijuana dispensaries. Nowhere is the preferences between men and women more pronounced than in concentrates. Men buy 70% of all concentrate products and 63% of all vapor pens, which indicates that a significant portion of male consumers focus on attaining the highest high possible when consuming marijuana. In general, Headset notes, “men are overrepresented in the cannabis consumer base” and the industry will have to change its marketing and product development to bring in more women to cannabis.

“CBD will absolutely be a part of any successful push in the cannabis industry to bring in more women,” Headset’s report reads. “Women already have a preference for CBD products, and it’s already closely associated with wellness.”

RELATED: How Cannabis Can Help Older Generations Work Longer And Boost Their Well-being

Millennials and Gen Z appear most interested in experimenting with different types of marijuana products. Although baby boomers have more disposable income overall, they aren’t as interested in trying new things. Half of all baby boomers still choose flower as their favorite marijuana products, and opt for concentrates and vapor pens less than all other generations besides senior citizens. Curiously, however, baby boomers and seniors buy edibles far more than their younger counterparts. 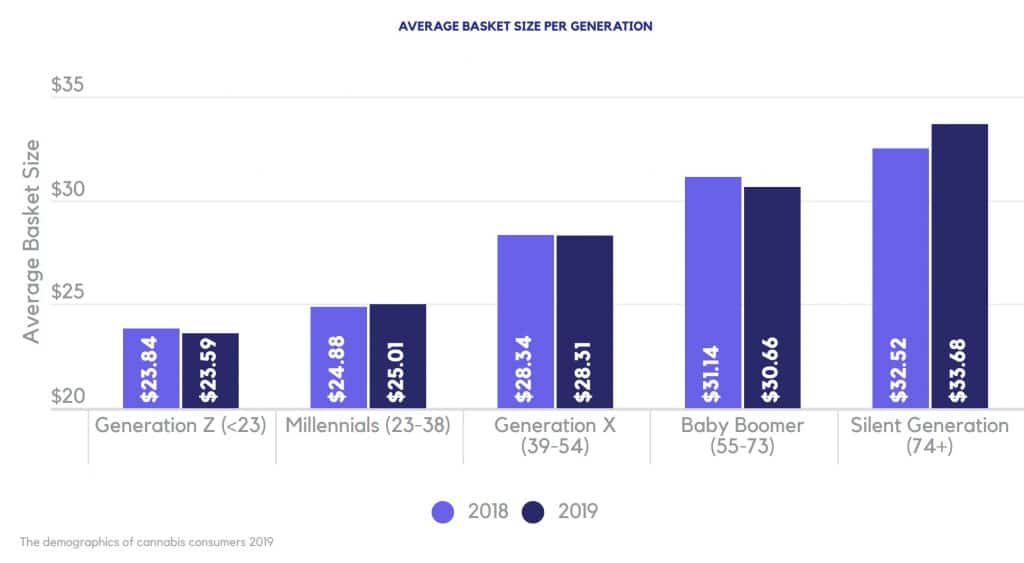 Graph courtesy of HeadsetOverall, the cannabis industry will soon be overwhelmingly dominated by millennial and Gen Z choices, Headset predicts. Because of these generations’ lack of funds, the packaging of products and selling them at affordable entry points will be an important barrier for marijuana sellers moving forward.

“It’s safe to say that as millennials and Gen Zers take over the market, price sensitivity will increase,” Headset writes. “Having tons of disposable income is not a hallmark of either generation. That said, cannabis use is, and obviously young people will continue to find room in their budgets for it but will continue enjoying it via a lot of little purchases, rather than by buying premium products.”