Alex Trebek Gets Choked Up Following ‘Jeopardy!’ Contestant’s Answer; Drake Responds To Being Booed Off Stage 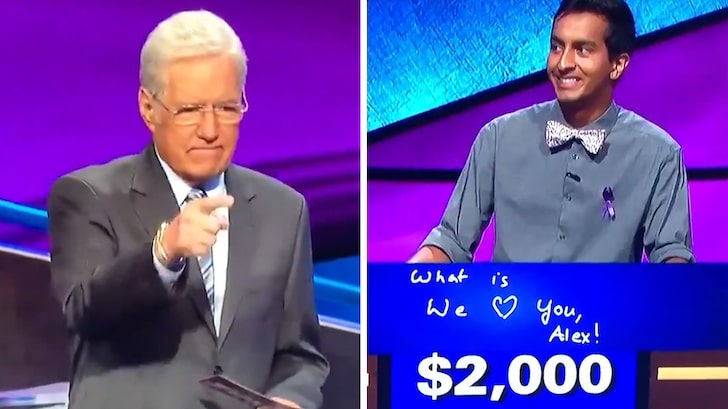 Drake’s feelings don’t seem to be too hurt after being booed off stage at Tyler The Creator’s Camp Flog Gnaw; A Jeopardy contestant’s final answer nearly brought Alex Trebek to tears.

Jeopardy! host Alex Trebek was nearly overcome with emotion during Monday’s show when contestant Dhruv Gaur had no chance of winning in Final Jeopardy, and, in place of an answer, wrote, “We (heart) You, Alex.” Trebek’s initial reaction was one of surprise, and he was clearly getting choked up as he tried to continue as usual. All three contestants were also wearing purple ribbons in support of Trebek, who is battling Stage 4 pancreatic cancer.

It didn’t take long for #WeLoveYouAlex to begin trending, and it was obvious that Trebek wasn’t the only one who was moved by Gaur’s message.

Alex Trebek getting choked up during Final Jeopardy today messed me all the way up. #Jeopardy #WeLoveYouAlex pic.twitter.com/QJVP4hJpGV

With #WeLoveYouAlex trending, Gaur doubled down on his message of love and support for Trebek.

I’m just very grateful I got the opportunity to say what I know everyone was thinking. Sending all the love. #weloveyoualex

Drake’s surprise performance at Tyler, the Creator’s annual Camp Flog Gnaw festival did not go as planned. Shortly after the “Money In The Grave” rapper took the stage at Dodger Stadium in Los Angeles Sunday night (November 10), he was booed right off it.

See, the crowd seemed to be hoping to see Frank Ocean instead of the Canadian rapper. And since the headliner for the festival was not announced before Sunday’s show, and the lineup reflects Tyler’s personal taste in music, many believed, in fact, they were certain that Frank was going to be the top act. So when it wasn’t him, they didn’t hide their disappointment.

Drake: “I’m here for you tonight. If you want to keep going, I will keep going. What’s up?”

Some fans boo loudly. One yells “No!”

Drake seemingly cuts his set short & ends the show there. “It’s been love.”https://t.co/n1BYrvLThc

“Make some noise for yourself tonight,” Drake told the audience in the middle of his song “Wu-Tang Forever.”

“I’m here for you tonight,” he continued. “If you want to keep going, I will keep going. What’s up?”

To his surprise (and mine too, honestly), the bitter crowd began loudly booing. “If you want me to keep going,” Drake said again, “I will keep going tonight.” Unfortunately, the crowd didn’t let up. The boos got louder and people started screaming “No.” So, with that clear response, Drake wasted no time exiting the stage. “It’s been love. I love y’all. I go by the name of Drake. Thank you for having me,” he said visibly disappointed while walking off stage.

Video of the incident has since gone viral, with many fans condemning the “ungrateful” crowd for their “rude” behavior. However, Drake is reportedly taking the incident in stride. DJ Akademiks tweeted Monday morning (November 11) that he spoke to the 33-year-old rapper, who told him that the performance was a “moment of humility which is always welcomed.” The “God’s Plan” rapper added, it “was just not my night. Wasn’t who they wanted to see.”

Drake is taking it in stride tho… he told me personally regarding the camp flog gnaw performance it’s a “moment of humility which is always welcomed”. He also added “was just not my night. Wasn’t who they wanted to see”.