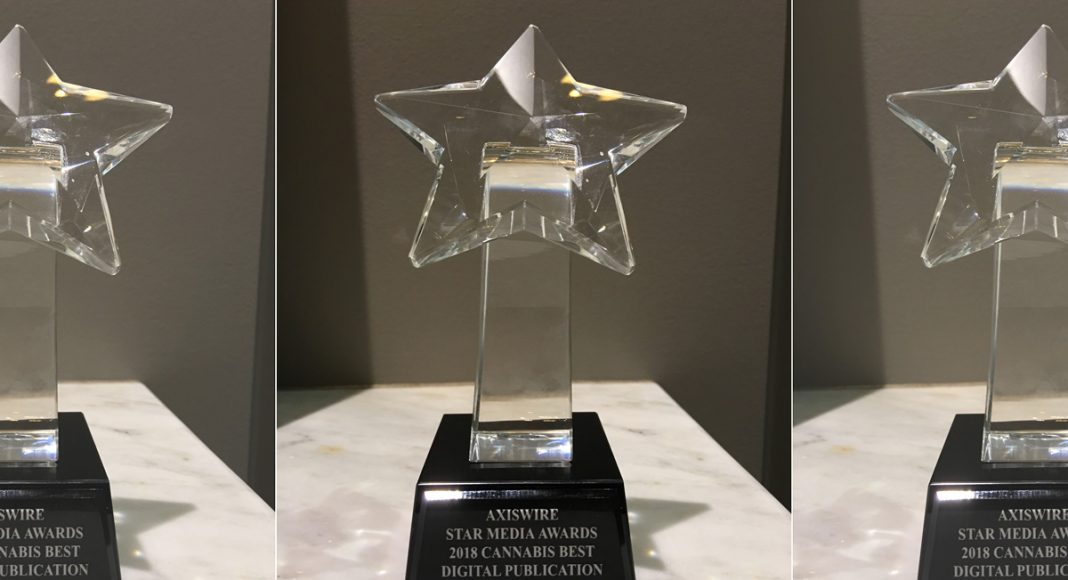 In a first for the industry, AxisWire held their inaugural Star Media cannabis awards Tuesday night, where they honored writers and publications for – Culture

In a first for the industry, AxisWire held their inaugural Star Media cannabis awards Tuesday night, where they honored writers and publications for excellence in the world of cannabis journalism — an essential, yet often unrecognized part of the industry. The Fresh Toast won Best Digital Publication. As founder and publisher, I am grateful our hard work and the work of our outstanding team has been recognized by our peers. While we are the “youngest” site in the industry, we have ascended to the top by serving fresh content daily. We could not have done it without our divers readership, their loyalty and their continued championing of The Fresh Toast.

The awards ceremony, held at a private estate in Las Vegas, was well attended by industry leaders, investors and — a first — the majority of cannabis media. Dope, High Times, Civilized, Daily Marijuana Observer, Green Market Report and more attended the event, something that has not happened since U.S. legalization. Debra Borchardt, head of the Green Market Report was the Mistress of Ceremonies.

The evening was part of a series of events kicking of MJBizCon in Vegas, the largest cannabis convention in North America. Founded in 2018 by Cynthia Salarizadeh, L.A.-based AxisWire is a technology platform aimed at connecting journalists and entrepreneurs by providing a suite of services ranging from press release writing and distribution to consulting and compliance. The wire service distributes to more than 1,700 journalists and writers globally. Plans are already in the works for the event next year.

Two of The Fresh Toast freelancers also won awards. Javier Hasse, author of “Start Your Own Cannabis Business” published via Entrepreneur Media won Best Business Writer. His book hit the #1 best seller spot in the cannabis category the week of its release. Javier writes not only for The Fresh Toast, but also CNBC, Playboy, Entrepreneur, The Street, CNN, Benzinga, Marketwatch and more.

Sara Brittany Somerset won Best Freelancer Writer. Sara is a U.N. based reporter and photographer and her content not appears in The Fresh Toast, but also Forbes and the New York Times.

The Fresh Toast launched at the end of 2016 and syndicates content to daily newspapers across North America. In addition, they partner with Skipta and 800,000 medical professionals to help educate the medical community, patients and caregivers on how cannabis can be used to treat symptoms and pains related to diseases and injuries. The Fresh Toast is positioned to be the most trusted voice in cannabis.

In a first for the industry, AxisWire held their inaugural Star Media cannabis awards Tuesday night, where they honored writers and publications for -...

Marijuana Foe Jeff Sessions Is OUT, But Is That A Good Thing?

What Tuesday’s Marijuana Wins Mean For The Future Of Legalization

As Canada Legalizes Weed, What To Know About Market Investments, Retail Shortcomings, And More