The Fresh ToastThe most trusted name in cannabis
More
HomeCannabisStudy: 18% Of People 21 And Over Consider Themselves Cannabis Users

Study: 18% Of People 21 And Over Consider Themselves Cannabis Users

The cannabis market, which not long ago was considered a niche in which outliers and rebels convened, is now blossoming into a recognizably legit industry and is growing at a rapid clip to become a totally mainstream market. As the landscape changes, so do people’s attitudes about the plant.

In a new self-funded survey conducted by Kadence International of people age 21 and over in the U.S., researchers set out to understand all facets of the American cannabis consumer. The study found that 1 in 5 U.S. adults have used cannabis within the past 12 months, with 32 percent of them using cannabis daily.

While now recreationally legalized in a number of U.S. states, discussing cannabis and its benefits is often done in hushed tones. The study we have conducted tries to demonstrate the role that cannabis has in modern society. We aimed to understand the reasons why people were using it and how often. Most interestingly, there is no defined and clear specific demographic for cannabis users, it is used across all adult age groups, socio-economic backgrounds, and locations.

The most prevalent form of imbibing in cannabis was smoking, though just over the halfway mark at 55 percent. Out of the 1 in 5 Americans utilizing cannabis, 48 percent use it to relieve anxiety, 40 percent use it as a sleeping aid or for pain relief and 1/5 use cannabis as a substitute for prescription medicine. These are overwhelming results that speak highly of the herb’s many uses. The table below breaks down the most common reasons Americans use cannabis: 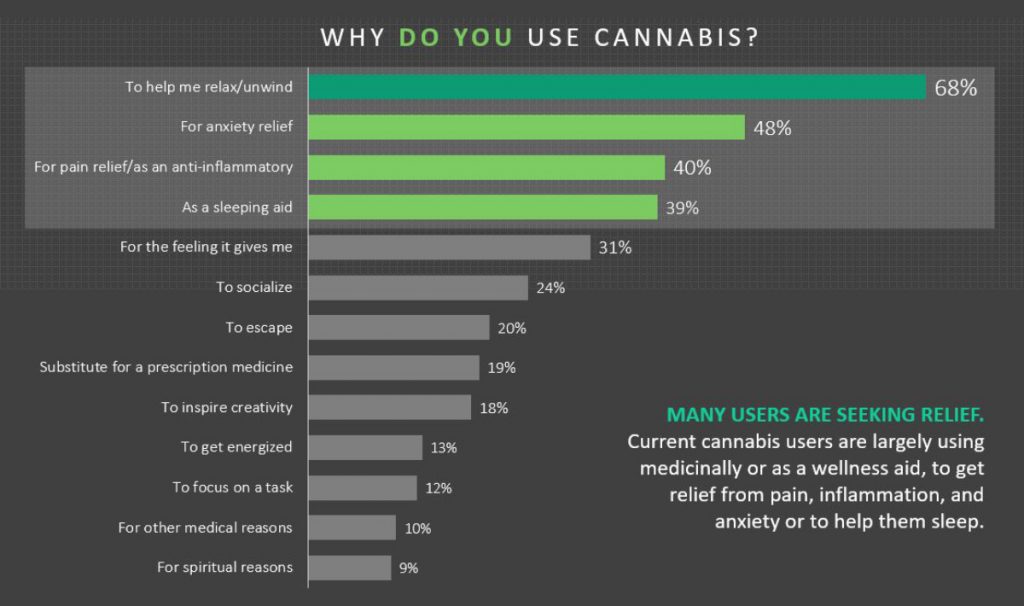 As you can see, most people want to just relax either during a harried day or maybe in the evening as they kick off their shoes. Which leads to another interesting stat: just about half (47 percent) of cannabis users have reduced their alcohol intake. Instead of sitting back with a glass of wine to unwind, people are sparking up or hitting the vape pen. Over 50 percent also said that they thought of cannabis as less dangerous than alcohol.

Here’s the real kicker, out of everyone surveyed, only 4 percent said that they would absolutely not ever try cannabis, legal or not. That is a very small portion of people who still cling to close minded ideas that were first brought about by the failed War on Drugs. Very small. Cannabis has become mainstream indeed and as more people pick it up, the less anxious, the more calm, the more social and the the happier the U.S. gets.

There are many ways to get lifted — some take longer than others, but also often last longer as well. Here are several methods to fit everyone's cannabis fueled lifestyle.

Cannabis Withdrawal: How Bad Is It Really?