The Fresh ToastThe most trusted name in cannabis
More
HomeCannabisWhat Does Instagram's Ban On Vaping Influencers Mean For Cannabis?

What Does Instagram’s Ban On Vaping Influencers Mean For Cannabis?

As explained by Facebook, the company seeks to filter certain types of content to avoid encouraging the use of products that threaten the health of its users.

Facebook Inc FB 0.05% recently announced an advertising ban system for Instagram aimed at prohibiting posts that promote the use of vaporizers or weapons.

While the ban is focused on curbing the use and promotion of tobacco-related vaping products, it has many cannabis-related influencers thinking they’ll even more obstacles than they already do when it comes to their professional and network development on social media.

Benzinga reached out to influencers in the cannabis space and asked what the ban means for them, and contacted Instagram parent company Facebook, Inc. FB 0.05% for comment.

The battle between Instagram and cannabis is not new.

Although Instagram’s latest initiative is not focused on cannabis products, but rather on nicotine vaping products, the move came as no surprise for cannabis influencers who are already used to all kinds of restrictions.

As explained by Facebook, the company seeks to filter certain types of content to avoid encouraging the use of products that threaten the health of its users.

“Our policy prohibits any marijuana seller, including dispensaries, from promoting their business by providing contact information like phone numbers or street addresses. We do allow marijuana advocacy content as long as it is not promoting the sale of the drug.”

Where does Facebook draw the line? How does it make sure to stop harmful promotions while still allowing those who seek to generate awareness around products with medical properties? How does it ensure cannabis consumers and influencers do not see their speech restricted?

Here’s what top influencers in the space think.

For Harborside Inc’s HSDEF Steve DeAngelo, Facebook and Instagram are not “really serious about protecting the public from contaminated vape pens.”

Otherwise, “they would allow legal, licensed cannabis companies to advertise on their platforms — because every single case of a contaminated pen has been traced to unlicensed, underground sources,” he says.

“Until that happens, influencers will find a way to drive traffic to unlicensed suppliers, no matter what steps Facebook takes. It’s more effective to use market forces than brute force.”

Alice Moon is a cannabis entrepreneur who was deleted from Instagram when she had 14,000 followers. She’s now back up to almost 9,000.

“I’m afraid that this new policy will open the door for Instagram to target cannabis influencers even more so than before,” she says. “The AI may be trained to delete posts that contain smoke, so how will it know the difference between vape smoke and dab smoke?”

Moon says she hopes Instagram will “consider creating a pathway for cannabis influencers to safely exist on their platform. Otherwise, every person who smokes on their page is at risk for deletion.”

The Facebook spokesperson tells Benzinga that the sale or promotion of marijuana has long been prohibited on Instagram: “these new policies apply to tobacco vapes.”

With a combined Instagram following of roughly 100,000, Rachel Wolfson, weed comedian, is as Insta-savvy as one can get.

“It will definitely affect the way cannabis companies advertise products on social media,” she tells Benzinga.

“It’s just their latest effort in censoring cannabis content. It’s hilarious alcohol [which kills people] only gets ‘special restrictions,’ yet weed and vaping get categorized with weapons,” Wolfson says.

“It will be interesting to see how they choose to control the content once it becomes federally legal.”

Facebook tells Benzinga that dispensaries can promote the use and federal legalization of marijuana on Instagram so long as they do not promote the sale of the drug or contact information for the store.

He was not surprised to see “Big Tech banning vape ads” either, he says.

“We have learned how to get around the bans by Big Tech with decentralized messaging and community influencers, but it’s hard and presents constraints.”

Bans like these ultimately drive more activity to the illicit market by “confusing consumers and constraining operators,” he says. “It’s a great way to get more people sick.”

Jon Cappetta is the vice president of content for High Times Holdings. This means he’s ultimately responsible for numerous social media accounts beyond his own that boast more than 33,000 followers, including those for High Times Magazine, Dope Magazine and others.

“Blanket enforcements like this are intentionally vague so the platform has as much freedom to flag or remove as it likes,” he says.

While Instagram may say it’s concerned about nicotine right now, there’s no way to know where their priorities will be tomorrow, Cappetta says.

Think about it: glass art like bongs or pipes are technically tobacco products; 510 thread batteries are technically vape products. Brands that make anything associated in any way with either category could now be in danger of losing their pages if they gain any momentum with this ban.”

These limitations, in addition to the ban on traditional cannabis advertising, make Capetta think this it’s “a clear signal of ‘we don’t want your kind on our platform.’” 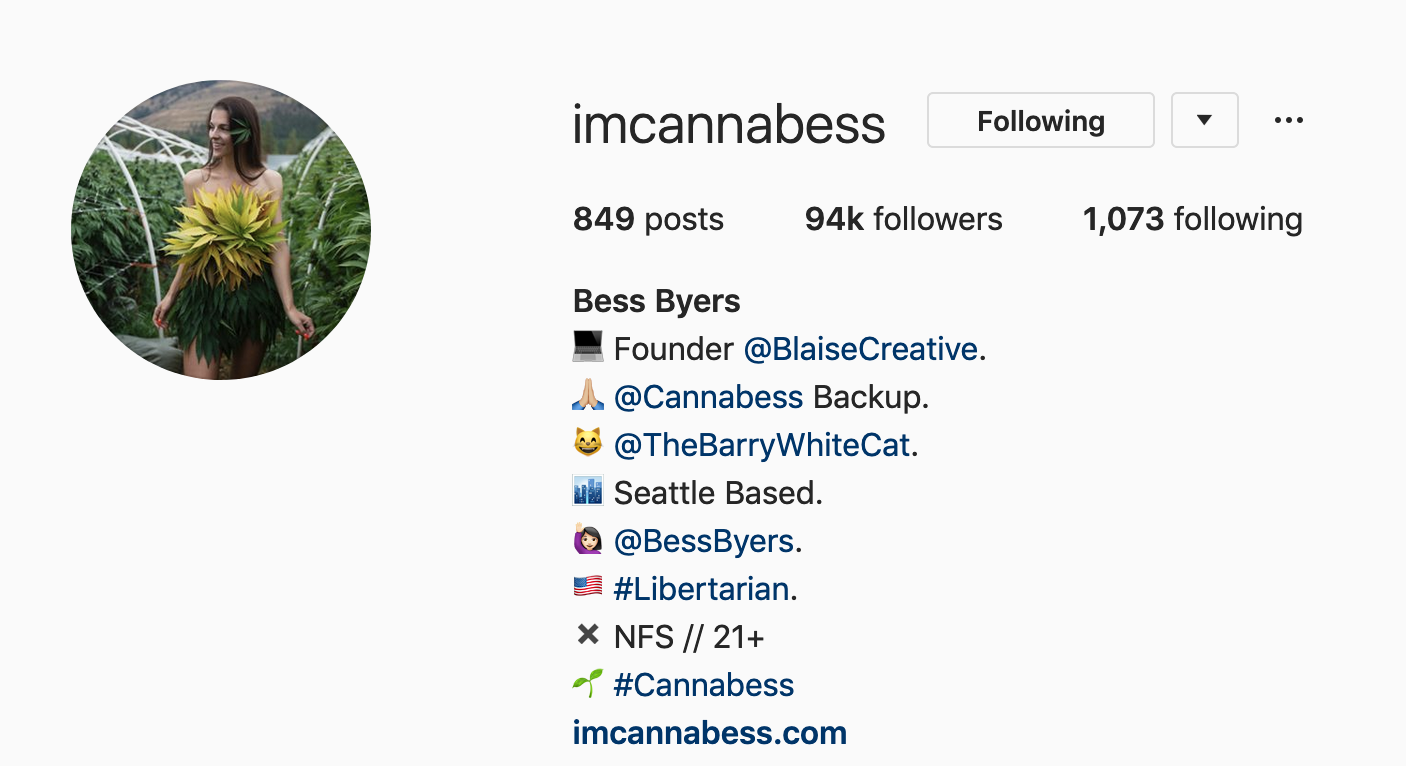 One of the top influencers in the cannabis space is, without a doubt, Bess Byers. She’s been in a battle of sorts with Instagram for quite some time now: her account has been deactivated and reactivated so many times it’s impossible to keep track.

As founder of Blaise Creative, Byers creates content under the premise that she cannot pay for advertising — and does not intend to either.

“This forces me to think outside the box and build an authentic audience. Moreover, I don’t like or trust Facebook Inc., so I don’t want to give them money in addition to the data they already collect from me,” she tells Benzinga.

“I do wonder if Instagram’s ban also includes artificial intelligence or image recognition software. I’ve theorized posts with smoke clouds get shadow banned or suppressed in their reach.”

Other creatives Byers knows have noticed the same issue, she says.

Instagram does use AI to find content promoting the sale of marijuana, the spokesperson told Benzinga, while emphasizing that the new vape policy solely targets tobacco.

Data on the amount of drug sales removed from Instagram is available in its Community Standards Enforcement report, according to the company.

Bentley Rolling might have one of the coolest jobs on earth: cannabis photographer and videographer. One of the ways he landed it was by building a strong social media presence.

He expresses frustration about seeing legal cannabis being grouped in with tobacco vaporizers. “Vaporization is one of the more healthy ways for people to medicate,” he says.

“There are many companies dedicated to providing patients with high quality, compliant vaporizers. They are already taking a huge hit to their sales based on the misinformation and false propaganda around vaping.”

The regulation around legal cannabis is more strict than for organic food, Rolling says, adding that both the extract and the cartridge and hardware are tested.

He was unsurprised to learn that Instagram has started cracking down on posts promoting vaping.

“With the extreme uproar around vaping-related illnesses, it was only a matter of time. As a community, we’ve gotten used to living in a perpetual gray area. What we’ve come to learn over the years is to never give up. They can try to silence our community, but we’re here and we’re not going anywhere. The key to legalization is education.”

In Jonathan Hirsh’s view, social media is, unfortunately, “not a place for free speech.

“As Facebook is a private company, they have the right to govern their property as they see fit,” he says, noting he that he is unsure we’ll ever see true free speech for cannabis communicators.

These issues are compounded by unclear rules, he says.

He does suggest cannabis influencers use the “Age Gate” option when it’s available.

“I have generally avoided discussing cannabis e-vapes as I have always had a suspicion that they were incredibly unhealthy for a multitude of reasons. From the cartridges themselves, to the material being processed into oil, to the terpenes being added back in at unknown ratios, and yes, even the cutting agents,” Hirsh says.

“So for now I will continue avoiding discussing cannabis e-vapes and posting educational content surrounding the industry, growing, extracting and all the cannabis gadgets.”

Boasting 136,000 followers on Instagram, more than 2 million on Facebook and 30,000 more on Twitter, Inc. TWTR 1.9%, Canadian Jacqui Childs has a big reach in the cannabis space.

In an already challenging space where brands and influencers need to think outside of the box to get their message across, the new ban will only force them to get more creative, she says.

“First they took the likes away, then deleted posts and shadow bans. The rules are the rules whether we like them or not, but I’m up for the challenge and I believe other creative geniuses in the space will be able to work within these new guidelines, as long as the guidelines are made clear — social platforms are famous for draconian behavior.”

She suggests that influencers not put all their eggs in one basket and perhaps focus on other online platforms.

“As an influencer you want and need your voice to be heard. Add all the apps and platforms to your voice and become a choir.” 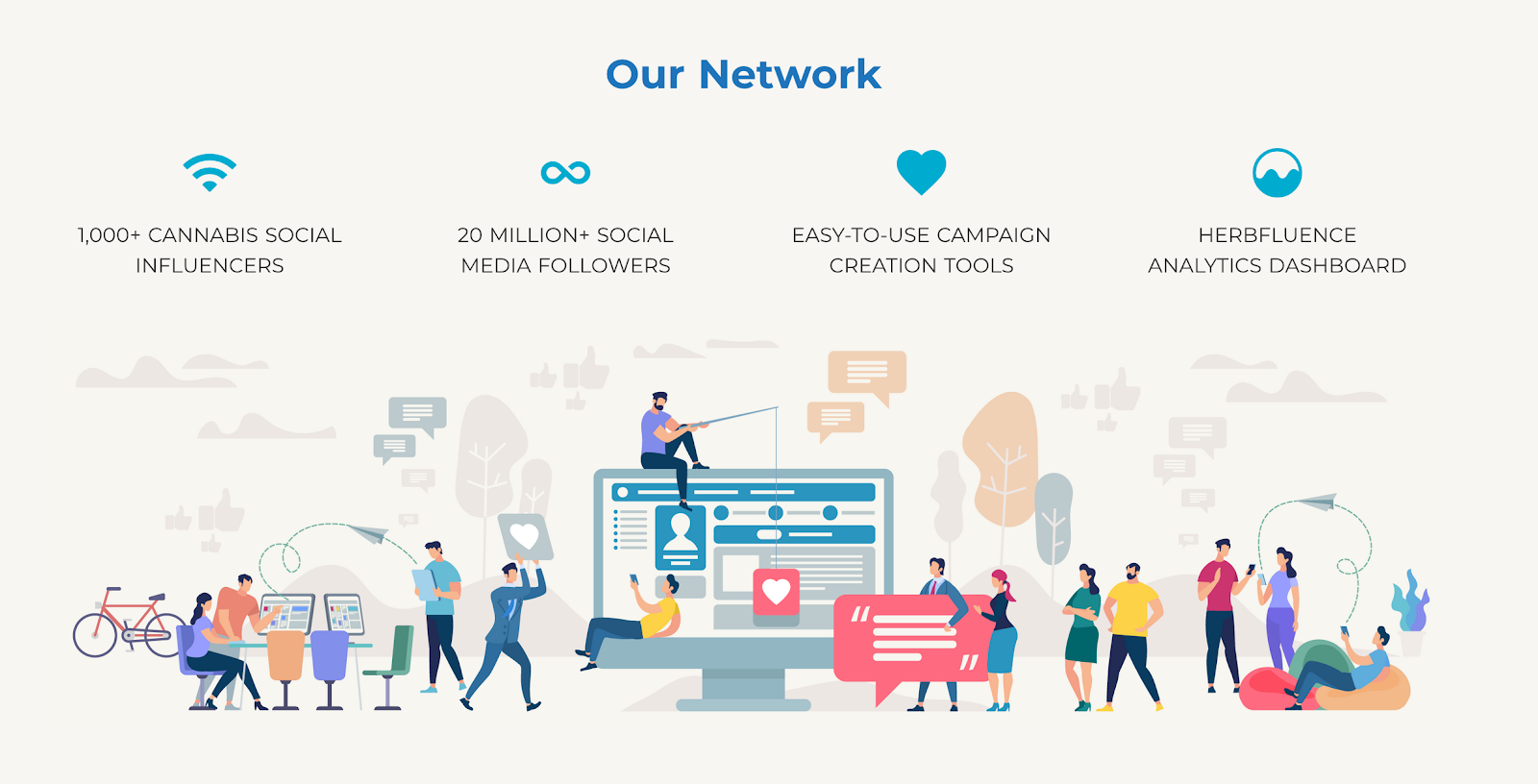 Finally, we spoke with Tyler Knight, founder and CEO of Herbfluence, an online platform that connects cannabis social media influencers with brands looking to advertise to the millions of cannabis consumers in the U.S. and Canada.  Herbfluence launched last month and already has more than 120 of the leading cannabis influencers on board, with a combined reach of over 15 million cannabis consumers, as well as several client brands.

Facebook makes it “incredibly difficult” for businesses in the cannabis space to advertise their products, communicate with their customers and grow their sales, Knight says.

“Moreover, many of their cannabis policies are unclear and often arbitrarily enforced,” he says. “I believe Facebook’s cannabis advertising policies are stifling the sales of thousands of small businesses, making it more difficult for hundreds of influencers to make a living, and hampering the legalization movement.”

The more this friction and frustration is alleviated, the more the industry will be able to move forward, Knight says.

This article originally appeared on Benzinga.

The federal government is experiencing an awkward, slow decriminalization process.

Want To Experience The Cannabis Harvest In California’s Humboldt County? This Company Will Take You For Free

Gen Z And Millennial Cannabis Consumers Are Influenced By… Who? And What?