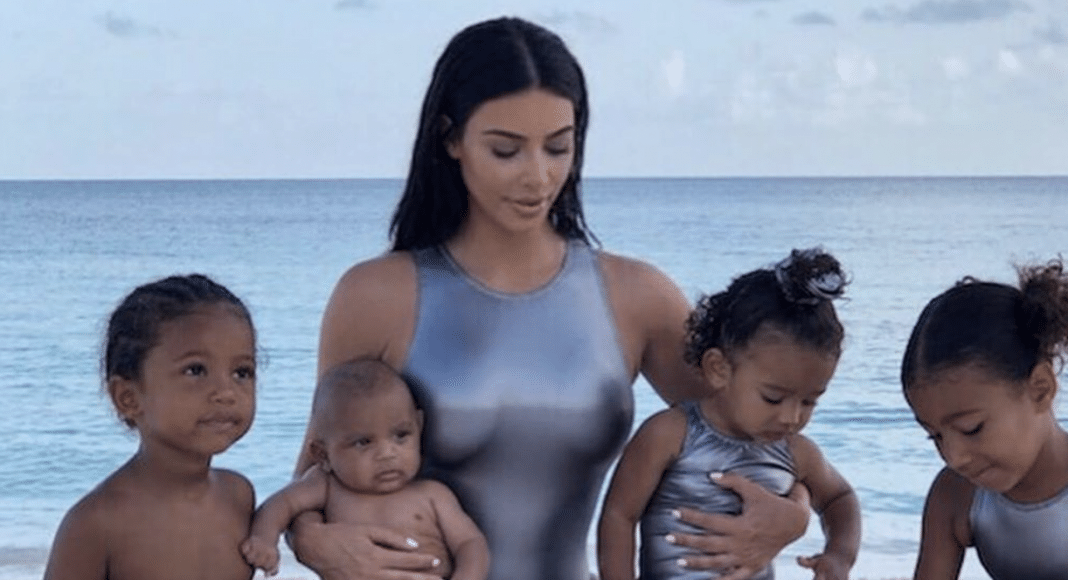 Kanye West to Kim Kardashian: no more makeup for North!

The rapper and father of three has put a stop to his wife letting their 6-year-old daughter wear makeup, even if it’s just for play. While celebrating the launch of her KKW x WINNIE makeup collaboration in New York City this week, Kardashian told E! News about how her hubby reacted when he caught North wearing her mother’s lipstick.

“She loves makeup but her dad won’t let her wear it. I think he had it, he changed all the rules,” the beauty business woman said, explaining: “I’d let her wear, you know, she has a little red for Christmas, I’d let her wear a red lip, or I’d let her do one pop of something. I’d let her if she’s wearing a black dress, a black lip.”

Apparently things were fine until North’s aunt, Kylie Cosmetics founder Kylie Jenner, started gifting her niece “all these lip kits,” Kim said. “I kind of got in trouble for that. So, it’s now no more makeup.”

As documented on social media in the past, North has appeared wearing red lips for the Kardashian family’s annual Christmas Eve celebration. She’s also worn other lip colors for her dad’s Sunday services, like this dark lip she sported back in March.

Kim’s older sis, Kourtney Kardashian, also has a playful approach to allowing daughter Penelope, 6, play with makeup. “My daughter loves makeup,” Kourtney revealed while shooting her beauty routine for Vogue. “She has a little vanity in her room that my mom [Kris Jenner] gave her for Christmas. I let her play, and I try to keep her makeup as clean as possible.”

The Duke of Sussex turned 35-years-old on Sunday (September 15), and his wife, Meghan Markle, couldn’t wait to celebrate her sweetheart’s special day. Early yesterday morning, the Duchess took to the Sussex Royal Instagram page to spread some birthday cheer for the man she calls the “best husband” and “most amazing dad” with a touching picture collage and even sweeter message.

“Wishing a very happy birthday to His Royal Highness Prince Harry, The Duke of Sussex!” begins the caption for the celebratory post, which includes a special note from Markle that reads: “Your service to the causes you care so deeply for inspires me every day. You are the best husband and most amazing dad to our son. We love you

Just a month before Harry’s anniversary, Markle celebrated her 37th birthday on August 4. Unlike last year’s trip to Botswana, the Duke took her to the wedding of family friend Charlie van Straubenzee.

It’s been quite an exciting year for the Royal couple, who welcomed their baby boy, Archie, back in May. Prince Harry and Duchess Meghan, who tied the knot in a royal wedding ceremony in May 2018, announced they were expecting their first child last October.