Whenever a social media product undergoes a radical aesthetic redesign or adds to its services provided in any way (minor or major), users generally react in a firm, unified way: “This is stupid.” Memes and GIFs are usually involved.

But this is almost always knee-jerk and temporary. Users might threaten leaving a specific social media—“X company added dumb Y thing I don’t like because I’m human and change scares me”—but with ferris-wheel-level logic: They post their threats on the very same forum they threaten leaving! It’s like protesting animal rights at McDonald’s while downing a Whopper with cheese in the ball pit.

A similar reaction happened when Instagram debuted its new service Instagram Stories recently. As if it were an original thought, myriad of users had posts on the service involving some variation of: “Wait…isn’t this Snapchat?” Then those same highly original people told everyone to follow them one the Snap and posted their username.

It all followed the same similar pattern. It was treated like another joke. That is, until everyone started using it for real. 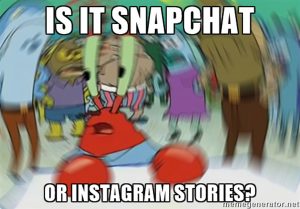 How much is Instagram Stories like Snapchat stories? It’s exactly the same thing. Pictures and videos you can doodle over that self-destruct in 24 hours. Add some geotags and DJ Khaled and no one would be able distinguish the difference. The thievery doesn’t stop there. Instagram also *stole* Snapchat’s latest story update, which causes stories from your feed to rollover into one another, though in a much more literal way. Let’s also shout out these Instagram burglars for adding the mind-blowingly simple option to tap backwards on stories and re-watch posts. It’s one of those features you always wished you had on Snapchat and wonder why it wasn’t there from the jump (says the writer who barely grasps the complicated machinations behind coding and programming).

None of this really matters. The Internet long ago affirmed how little it cares about piracy as long as it’s something they either want or doesn’t threaten them. Ask the record industry. And the gradual flight to Instagram Stories shows it’s something lots of people want, or at least are interested in.

Or is it? Hmm. Maybe “people” is the incorrect term. A PR person would instruct me to use the label “influencer,” but every time I hear that description used earnestly, especially when the speaker’s referring to themselves, I come closer and closer to understanding the Japanese tradition of seppuku. Instead we’ll settle on “celebrities.” And whether it’s genuine or not, celebrities love Instagram stories. 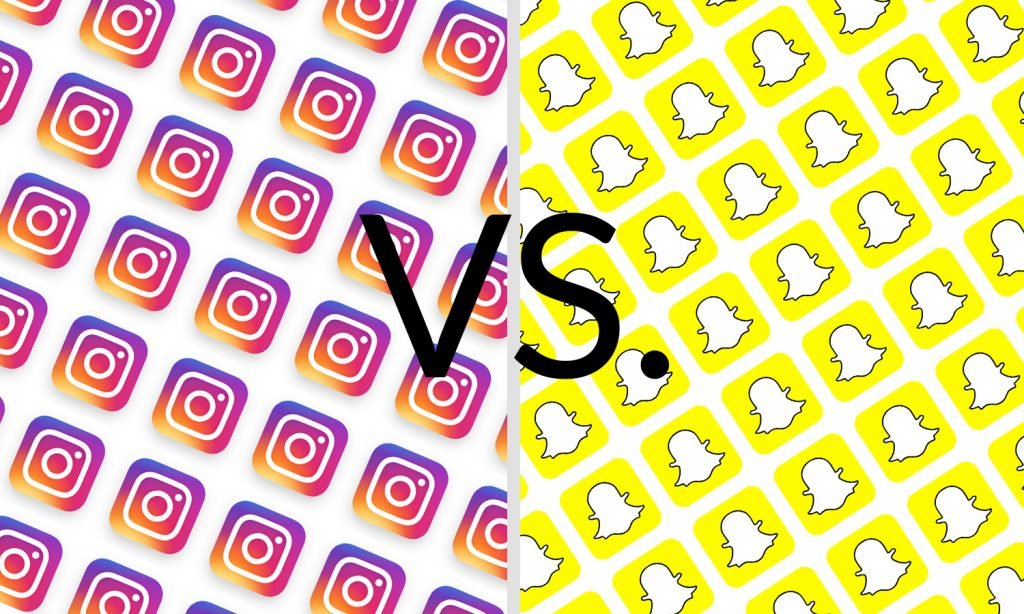 Here’s what happened: At some point, Snapchat (kind of) sold out to celebrities. Not homegrown celebrities, mind you, but real celebrities. Rihanna, Kylie Jenner, and yes, DJ Khaled, among others, were some of the first to embrace and, more importantly, promote the app. To be clear: This is not a criticism and perhaps happened unconsciously. Like every American media company, Snapchat wanted to grow, and like every American media company knows, celebrity endorsements are a surefire way to draw attention to a product. But it did happen. Celebrity stories populated feeds and were more interesting than anything your friends were posting (no offense, friends!) Snapchat also unveiled Discover in January 2015, partnering with media brands to provide content to its large user base. Echoing Facebook’s shift years ago, it moved from a primarily peer-to-peer network to a feed-based social media platform relying upon celebrities and media partnerships to evolve.

These events forced anyone over the age of 25 to reconsider Snapchat much more seriously. It wasn’t that long ago that many thought of Snapchat as a way for teenagers to safely send nudes to each other (something that very much still happens). And, yes, grain of salt time: you can screenshot those nudes, but the other person would know and then you’re kind of a creep or worse, even if it is your girlfriend, who probably told you not to screenshot those lewd pictures she sent you. Important side note to this rambling tangent: This “safely” thing also encouraged dudes to send too many dick pics to too many girls who didn’t ask or want to say that particular penis at that particular time.

So maybe it wasn’t all a good thing. Snapchat’s juvenile stigma wasn’t coming out of nowhere is my point.

Anyways. When Snapchat originally added its story feature a few years ago, it simplified the experience. Instead of mass-sending that same picture of you and your friends at a party to everyone on your contact list, you can induce your desired FOMO effect by adding it to your story. Furthermore, you can create actual stories. You can provide a similar experience of that adventure you were on for those not there. (Which, again, you probably aren’t doing for the most heroic of reasons, but it’s chill.)

But any stunting you think you’re doing, celebrities are looking at you like, “lol really fam?” Celebrities shine. Whether we like to admit it, Kylie Jenner singing songs in her car is generally more captivating than almost anything your random friend from college might come up with. The difference should be expected: She knows how to play to the camera. Most of us, meanwhile, don’t.

(Caveat: this isn’t completely true for the younger kids who grew up with social media always being a thing and group-text in class instead of passing notes. A camera in their face isn’t abnormal.)

But finding persons of interest on Snapchat can be clunky. Snapcodes help a little, as well as “Official Stories” when adding friends, Snapchat’s version of verified accounts. The feature adds an emoji next to their username, like DJ Khaled and his key. Otherwise the process to pinpoint some celebs by username would be near impossible. For example: Gucci Mane goes by guwopsnap, which isn’t that hard, but Justin Bieber is “rickthesizzler” on the Snap. (Don’t ask because I don’t know.)

Meanwhile, Instagram’s database is streamlined. Google Taylor Swift and her Instagram profile pops within the first few results (assuming she hasn’t recently been tagged in any controversy, which…). Following Swift’s confirmed Instagram includes her IG Stories. You don’t have to hunt to figure out if it’s her, and this feature minimizes the amount of her accounts you’re following. Most users don’t have time to post the same picture on both platforms, and will likely choose one over the other. This is almost certainly true of celebs, unless they’re promoting a product or have some incentive otherwise.

But if celebrities choose IG, and early indications suggest many of them like it, lots of fans will follow, if only for the Stories aspect. Furthermore, users prefer their social media integrated and consolidated. Think how Facebook subsumed Periscope by adding Facebook Live. Media companies and celebrities using it was expected, but normal people, those whose only social media service is Facebook, were using it, too. Like old people, (read: parents). A similar pattern could repeat with Instagram and its Stories, but on a smaller scale.

On the other hand, Google the phrase “Chance the Rapper snapchat” and three to four different usernames will populate. True story: I followed a fake Chance snap for around four months before my friend corrected me. Someone ripped videos and pictures from Chance’s actual account then uploaded them to appear genuine. Intermittently, product endorsements would also appear, with a line from fake Chance that read “Go support the fam,” compelling me to do so. I didn’t, then felt guilty, disappointing someone who, turns out, wasn’t real.

I don’t know. Maybe this is about my increasing inability to discern what’s real and what’s not online. All of it’s fake pageantry, sure, but if everyone accepts that fake pageantry, that makes it kind of real. Some mornings I wake up believing that’s the case, some mornings not so much. My perception changes as frequently as the weather.

One product exacerbates this problem, while the other doesn’t. Snapchat’s intractable position to keep everything inside its app, refusing to create a desktop-and-browser portal of some kind, relying on users to screenshot posts to share amongs friends, denies them from a large part of how the internet works, because we live in a (don’t say share economy, don’t say share economy) share economy.

To be sure, this is a war of some kind. Instagram—i.e. Facebook, which owns Insta—wants what Snapchat has. Reports came out in March of this year that Facebook bought the app Masquerade, which “puts fun filters, masks and special effects on selfies and videos,” as Bloomberg describes it. Sound familiar? To what use Facebook might implement such a service seemed questionable around that time; now it’s obvious.

Does this spell the END OF DAYS for Snapchat? Not really. Snapchat passed Twitter in daily usage this summer. They reported 150 million users log on to the app every day, and that was an increase from 110 million users in December, 2015. (Bloomberg estimated Twitter at 140 million daily users comparatively.)

Snapchat has evolved multiple times around and will continue to do so. Their CEO didn’t just deny Facebook’s $3 billion cash acquisition offer to give up at the first sign of trouble. Its roots as a peer-to-peer network persist—with text, picture, and video messaging option—and Instagram doesn’t have anything close to competing. No one wants to slide into those DMs.

But Snapchat’s door on the self-destructing media market—or whatever you choose to call it—had been slammed shut and locked and welded shut for years. Instagram has just opened that door. That alone should be enough to terrify anyone in Silicon Valley. Even a ghost.

If you love to drink, hangovers may be hard to avoid, but there are a few preemptive things you can do to keep them from ruining you.

Is Smoking Marijuana Bad For Your Lungs?

Does Marijuana Actually Ruin Your Memory?