The Fresh ToastThe most trusted name in cannabis
More
Home Celebrity Why You Should See Robert Galinsky's New Play 'The Bench,' A Homeless...

Why You Should See Robert Galinsky’s New Play ‘The Bench,’ A Homeless Love Story 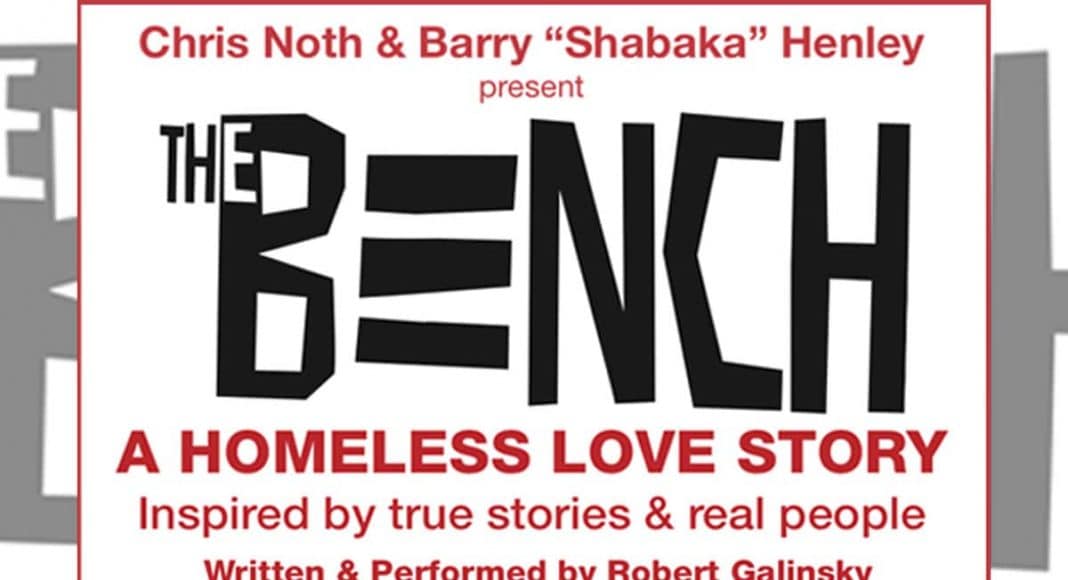 Robert Galinsky is a contributing editor to The Fresh Toast, writing various colorful articles involving creative cocktails for this fall and diving into how your favorite TV shows become slot machines. But he’s also a thriving New York City artist activist and this winter, he’s starring in The Bench: A Homeless Love Story in New York, a performance you should check out if you’re in the area. Here’s what you need to know.

The Bench, set in urban decay and rubble, explores the emotional heartbreak of five homeless characters and the catastrophic hysteria surrounding AIDS in the 1980s. It is directed by Jay O. Sanders, a passionate Shakespearian, and who most recently in the Richard Nelson play The Gabriels; Election Year in the Life of One Family. The sparse set is spectacularly integrated with beautiful hand-drawn art projections, from Daphne Arthur’s graphic novel adaptation of the play, and is scored by world re-known composer and multi-instrumentalist Deep Singh. It’s a unique and fresh blending of visual and audio arts, written by and starring Robert Galinsky.

What Do The Critics Think?

Previous performances of The Bench have been called “Galinsky is effortless—really quite extraordinary.” —Backstage Magazine; “The Bench features ensemble work, being done by one human being, with sustainable characters that have incredible nuances. It is palpably and real.” —Anney Bonney, Curator at The Kitchen; ‘Galinsky’s street dwellers speak in their own voices, and their voices ring true.” —The New Haven Independent; “Not your normal kind of theatre… it keeps your head moving.” —The NY Amsterdam News; “Galinsky herds multiple personalities into an evening of furious poetic justice.” —New York Press 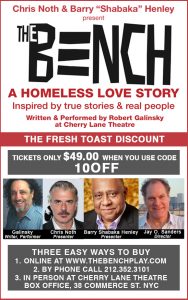 The Bench will run every Sunday evening from Oct. 15 through Dec. 17 at New York’s Cherry Lane Theater. The show runs 65 minutes, no intermission, and tickets are only $49 for Fresh Toast readers if you use the code 10OFF. Tickets can be purchased by visiting TheBenchPlay.com or calling 866-811-4111. The play is presented by Chris Noth and Barry Shabaka Henley.

For more info on Robert Galinsky please visit his website.