A vast majority of America’s police officers are in favor of easing marijuana laws, according to a wide-ranging Pew Research Center survey released on Wednesday. 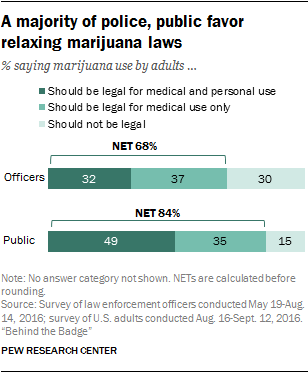 However, a larger share of the public than police favor legalization of marijuana for personal and medical use (49 percent vs. 32 percent). And more than eight-in-10 Americans support either legalizing marijuana (49 percent) or allowing only medical use of the drug (35 percent).

Other findings in the study show:

Diane Goldstein, retired Lieutenant Commander for the Redondo Beach Police Department and a board member for Law Enforcement Against Prohibition (LEAP) , said the poll was in line with what her group has seen in recent years.

“Law enforcement continues to represent an outlier view on this issue because police are trained with outdated, unscientific, drug-war-oriented materials. But the poll reflects a positive attitude shift when you see that it’s only 1 in 3 police officers who believe marijuana should remain illegal.”

One may to resolve the workload, Goldstein suggests, is to focus on more onerous crimes. “Police have more important crimes to fight than dealing marijuana infractions. I think this study makes that crystal clear,” she said.

The survey focused on law enforcement officers’ relationship with its community and race issues. As the authors of the survey write: “It comes at a crisis point in America’s relationship with the men and women who enforce its laws, precipitated by a series of deaths of black Americans during encounters with the police that have energized a vigorous national debate over police conduct and methods.”