The Fresh toastThe most trusted voice in cannabis
More
Home Celebrity Adele Shows Off Slim Figure In Photo With The Spice Girls; Meghan...

Adele Shows Off Slim Figure In Photo With The Spice Girls; Meghan Markle Appears In Trailer For Final Season Of ‘Suits’

After Adele took to see the Spice Girls’ reunion tour over the weekend, folks were surprised to see the 31-year-old titan debut a slim figure following her split from ex-husband, Simon Konecki. Now, it seems The Sun has received word that the pop singer is onto a new health regimen as she navigates the single life.

On Tuesday (June 18), the outlet reported that the singer has lost “more than a stone” (equal to 14 pounds) after working on a new fitness routine involving Pilates class. As per the outlet, she has signed up for Reformer Pilates with friend Ayda Field, an actress who is married to Robbie Williams. Among the other stars who are reportedly fans of the workout include Jennifer Aniston, Kate Winslet and Madonna. In the group photo, which was shared earlier this week, the British singer appears in girl power mode as she stands between Geri Halliwell, Melanie “Mel B” Brown, Emma Bunton and Melanie Chisholm at their Wembley show on Saturday (June 15).

Thank you for coming to celebrate with us last night @adele we love you!!! 👑 ✌🏻 #SpiceWorld2019

“Adele has been out enjoying herself and she sees that as her priority at the moment, along with being a mum to Angelo,” a source revealed to the tabloid. “She has been loving her new workout regime and it really works for her. It’s a bonus that she has shifted some weight. Her mates are glad she’s letting loose and there’s nothing but good feelings towards her. She’s got a new lease of life.”

During Adele’s outing to the comeback show, the 31-year-old singer shared a gallery of photos and videos from the outing, admitting that she got drunk with the four-piece. “Oiii last time I saw the Spice Girls at Wembley was 21 years ago!” she captioned the post. “Tonight with my nearest and dearest i cried, laughed, screamed, danced, reminisced and fell back in love with my 10 year old self. It’s no secret how much I love them, how much they inspired me to run for my life and never look back. I finally got to meet Ginger, I got drunk with the girls and quite frankly I can’t believe how far I’ve come. thank you for the madness I get to live, I couldn’t have got here without you 5 BRITISH legends! I love you!” 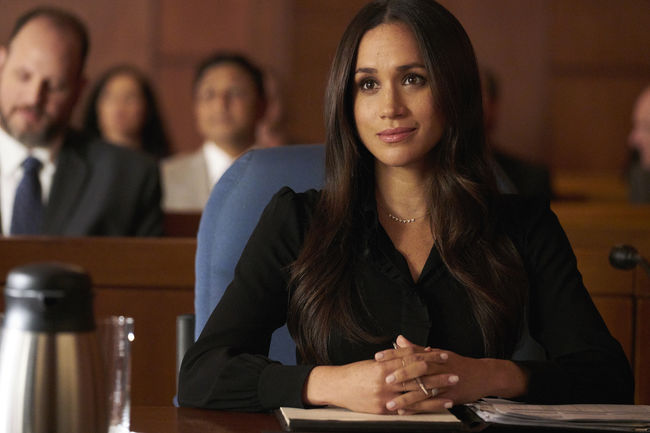 Meghan Markle departed USA network’s popular legal drama Suits at the end of its seventh season to become the Duchess of Sussex. Her on-screen husband, Patrick J. Adams, exited the show at the same time. Their characters, Rachel Zane and Mike Ross, rode off into the sunset together after their long-awaited wedding. While neither character appeared in the eighth season, Suits recently announced Adams would return for the ninth and final season.

After it was revealed Mike Ross would be back to stir up some trouble for his former colleagues on the show, fans were left wondering what would happen to Duchess Meghan’s character Rachel. Suits continued to tease fans by including Rachel in the season nine trailer.

So, will Duchess Meghan appear in the final season of Suits? Despite being heavily featured in the teaser, the possibility of a cameo remains unlikely. The show’s creator, Aaron Korsh, spoke to Deadline about the speculation regarding Rachel recently. “I can tell you that those things in the papers, I have no idea what they’re talking about,” he said.

A source involved with Suits told The Daily Star a different story, though. “We could create a storyline where Rachel and Mike have created new lives for themselves and are starting a family, with Rachel showing an obvious baby bump,” the sourced said. “I believe we could get away with only one or two lines from Rachel, perhaps saying how she would never have believed she would have such a wonderful life. This particular route would beautifully mirror real life.”