The Fresh ToastThe most trusted name in cannabis
More
HomeCelebrityChrissy Teigen Got Botox In Her Armpits To Stop Sweating; Archie Harrison...

Chrissy Teigen Got Botox In Her Armpits To Stop Sweating; Archie Harrison Has Red Hair Just Like His Dad, Prince Harry 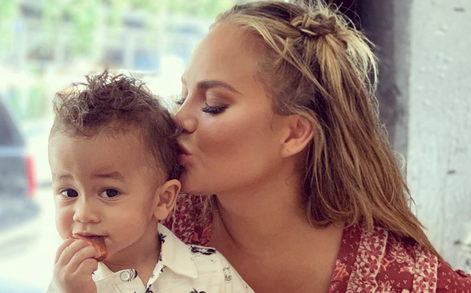 To treat an actual medical condition, Chrissy Tiegen got armpit botox injections; Prince Harry is excited his son has his hair

Chrissy Teigen Got Botox In Her Armpits To Stop Sweating

Chrissy Teigen once again proves she’s the most candid celeb out there. The 33-year-old television host took her Instagram followers inside a doctor’s where she received botox injections in her armpits. She received the treatment in order to curb excessive amounts of sweating, which is an actual medical condition known as Hyperhidrosis.

“BOTOXED MY ARMPITS” Chrissy excitedly captioned a video of Dr. Jason Diamond performing the injections. “TRULY BEST MOVE I HAVE EVER MADE.” She then went on to say “no more soaking through silk!” and revealed the procedure “truly didn’t hurt at all! But I also do laser hair removal there so my pain tolerance might be quite high.”

RELATED: Believe It Or Not, There’s A Royal Family Protocol For Baby Strollers

Chrissy’s mom can even be heard in the background of the video teasing her daughter. She says the skin in Chrissy’s armpits looks like chicken skin. LOL! That’s what mom’s are for, right? “That really isn’t anything,” Chrissy can also be heard saying. “It looked very frightening.”

“Hyperhydrosis can be treated temporarily by Botox injections; It requires about 100 units of Botox and lasts only about 3-4 months,” Laura ALtman, Physician Assistant at Tribeca MedSpa, explained to Page Six Style. Patients who treat Hyperhydrosis with Botox usually receive the injections a few times a year in order to keep their excessive sweating at bay.

Apparently, Archie looks like he’s going to have red hair just like his father, Prince Harry.
Hello and good freakin’ morning! If you’re not feeling chipper at the moment, wait until you hear this super exciting royal baby news: Baby Archie, Meghan Markle and Prince Harry’s cute new(ish) born bébé, is confirmed to be a red head—just like his daddy! How adorable is that!

According to a People source, Baby Sussex is the cutest lil thing. Not only is he a ball of sunshine, but the source says it appears he’s beginning to develop the Duke of Sussex’s signature orange/red/auburn-y hair color. “He’s a happy baby,” the source said. “He has lovely, puffy little legs and tufts of reddish hair. He’s really adorable.” Reddish! Hair!!! Thank God I have my hairstylist on speed dial, because the second that baby’s head of hair really starts coming in, I’m telling Olga to give me the hottest shade of Archie Orange™.

RELATED: This Is What Princes William And Harry Were Almost Named

Even though this source has the royal tea on Archie’s hair color, they still don’t really know whether he looks more like mom or dad. During their first family outing when Baby Archie was first presented to the world, Meghan admitted that she and Harry don’t really who Archie looks the most like. “We’re still trying to figure that out,” Meghan admitted.

Harry also put in his two cents, saying that Archie’s looks at the moment are subject to change. Which, fair. Be honest: Do you look exactly like your baby pictures? “Everyone says babies change so much over two weeks. We’re basically monitoring how the changing process happens over this next month really,” Harry said. “His looks are changing every single day, so who knows.”

Facebook
Twitter
Linkedin
Email
Print
Previous article7 Types Of Marijuana For Beginners And Those With Low Tolerance
Next articleDon’t Use Your Phone While High For This Reason, Warn Scientists