Americans Are Stressed AF And This Is The Main Reason Why

Feeling stressed? You’re in good company. A new report by the American Psychological Association says nearly two-thirds of Americans report being totally stressed out by the future of our country. That’s more than money and work.

According to the report:

When asked to think about the nation this year, nearly six in 10 adults report that the current social divisiveness causes them stress. A majority of adults from both political parties say the future of the nation is a source of stress, though the number is significantly higher for Democrats (73 percent) than for Republicans (56 percent) and independents (59 percent). 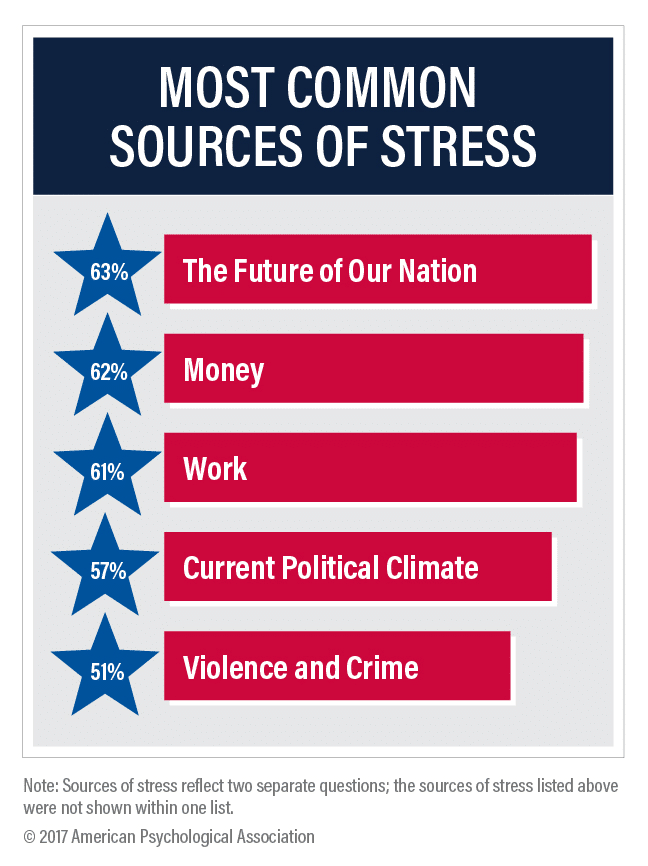 “We’re seeing significant stress transcending party lines,” said Arthur C. Evans Jr., PhD, APA’s chief executive officer. “The uncertainty and unpredictability tied to the future of our nation is affecting the health and well-being of many Americans in a way that feels unique to this period in recent history.”

Evans says it’s a stress that spans every generation.

The most common issues causing stress when thinking about the nation are:

To a lesser extend, unemployment and low wages (22 percent) and environmental issues (21 percent) were also cited as stressors.

News, now readily accessible in just about any form 24-seven, is also a cause of stress. Adults say they struggle with competing feelings of their desire to stay informed and their somewhat negative view of the media. While most adults (95 percent) say they follow the news regularly, 56 percent say that doing so causes them stress, and 72 percent believe the media blows things out of proportion.

On a positive note, more than half (51 percent) of Americans surveyed say the state of the nation has inspired them to volunteer or support causes they believe in; More than half (59 percent) have taken some form of action in the past year, including 28 percent who signed a petition and 15 percent who boycotted a company or product in response to its social or political views or actions.

You can read the full report online.