The name Mark Wahlberg is usually associated with music or movies, or even Wahlburgers, the burger joint he owns with his brothers Paul and Donny. But lately, the name elicits confusion over some strange remarks the actor made on social media.

Last year, Wahlberg, who is now a devout catholic, dropped a bombshell saying he regrets acting in Boogie Nights despite the fact that the film basically launched his acting career. And now, he’s making headlines again for revealing that he keeps the world’s most bizarre schedule. 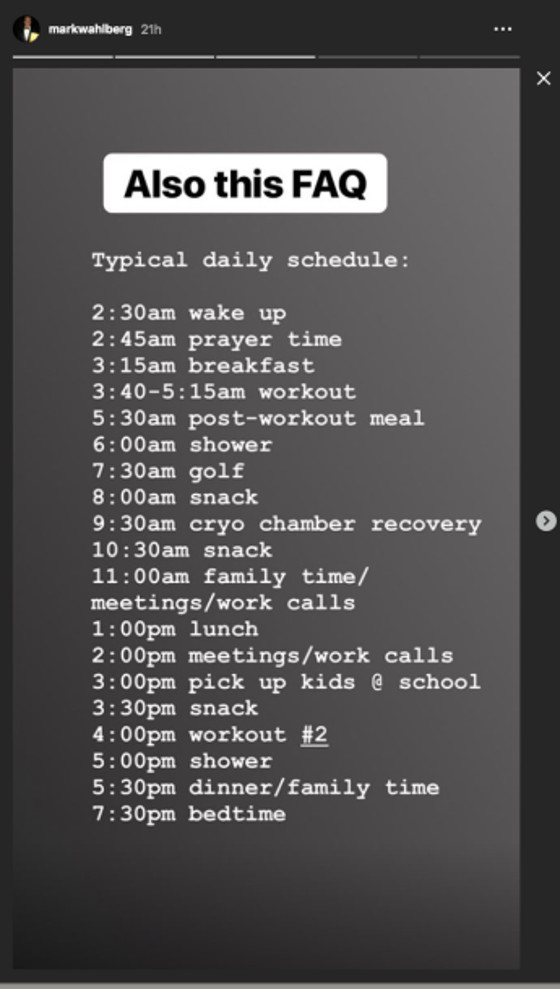 So many questions about Mark Wahlberg’s daily schedule. A 90 min shower at 0600? Just 30 mins of golf? Is it crazy golf? pic.twitter.com/Q7ETsw4HfM

The actor posted his typical daily schedule in an Instagram story, where he claimed that he wakes up every day at 2:30 a.m. and that he has breakfast by 3:15 a.m.. There’s also family time scheduled at 11 a.m., suggesting that his kids don’t go to school or that they’re home schooled. Wouldn’t be surprised.

Wahlberg also goes to bed by 7:30 p.m., something that has confused people from all over the Internet and has Vanity Fair suggesting that maybe he’s just a muscled and colicky baby.

Oh my god, Mark Wahlberg has dinner at 5:30 like a two-year-old and goes to bed half-way through Channel 4 news, all so that he can wake up in the middle of the night for a quick wank before prayer time? What is happening pic.twitter.com/DljyMAK534

Mark Wahlberg’s daily schedule accommodates no time for any acting but does include a 90-minute shower pic.twitter.com/UNXEUiIhmg

Mark Wahlberg and I have very similar days pic.twitter.com/uw3Ht1PeuP

Tea has long been linked with a variety of health benefits. Now, there's a new one.