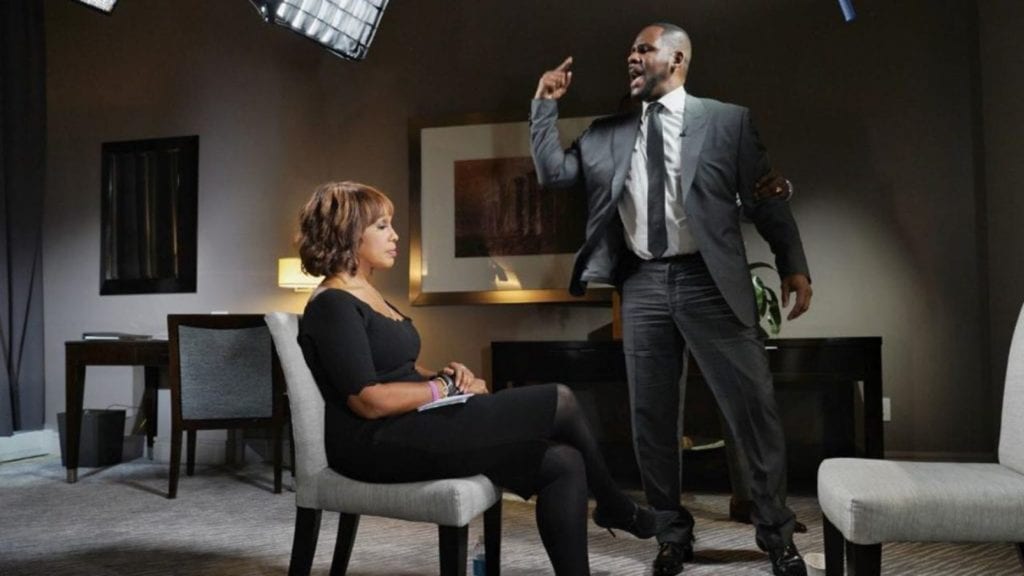 R. Kelly lashes out over sex abuse allegations in interview with Gayle King

R. Kelly swears he “didn’t do this stuff” and he’s “fighting for his life” in his first interview since “Surviving R. Kelly” dropped and new allegations of sex abuse surfaced.

“I’m very tired of all of the um, lies, I’ve been hearing things and seeing things on the blogs, and I’m just tired,” he told Gayle King on “CBS This Morning” on Wednesday.

The lies that bothered Kelly most, he said, included “that little girls trapped in a basement, helicopters over my house, trying to rescue someone who doesn’t need to be rescued because they’re not in my house.”

“Everybody says something bad about me. Nobody said something good. They was describing Lucifer. I’m not Lucifer. I’m a man. I made mistakes, but I’m not a devil.”

Kelly blamed “the power of social media” for spreading rumors about his alleged abuse and giving them traction.

“No. No. No,” he said when asked if he’d ever had sex with any minors, adding that his accusers were “absolutely” lying. “I have been assassinated. I have been buried alive from these lies.”

“I don’t need to. Why would I? How stupid would it be for R. Kelly, with all that I’ve been through in my way, way, past to hold somebody — that’s stupid,” he shouted.

He fumed, “That’s stupid! Use your common sense. Forget the blogs, forget how you feel about me. Hate me if you want to, love me if you want. But just use your common sense. How stupid would it be for me, with my crazy past and what I’ve been through — ‘Oh, right now I just think I need to be a monster and hold girls against their will, chain them up in my basement, and don’t let them eat, don’t let them out, unless they need some shoes down the street from their uncle!’”

Kelly then got up and shrieked, sobbing, “Stop it. You don’t quit playing. Quit playing. I didn’t do this stuff! This is not me! I’m fighting for my f—king life!”

He cried, “It’s not about music, it’s about having a relationship with my kids.”

“I need help. This is the kind of help I need. I need somebody to help me not have a big heart. My heart is so big. People betray me and I keep on giving to them.”

Kelly was acquitted of child pornography charges in 2008 that centered on a graphic video that prosecutors said showed him having sex with a girl as young as 13.

The “Girl’s Trip” actress said she supports the publicly scrutinized actor after he was arrested last month and charged with disorderly conduct for filing a false police report for a hate crime he allegedly staged against himself in January.

“The guy I’ve seen has always been someone who cares about people, who cares about others, and who’s very kind and who’s always been cool and sweet,” Latifah, 48, told Zainab Salbi, host of Yahoo News show “Through Her Eyes.” “And that’s just the guy I know. So until I can see some definitive proof – which I haven’t seen yet – then, you know, I gotta go with him until I see otherwise.”

RELATED: The Queen May Bestow This Rare Honor Upon Meghan Markle

She said she simply hopes “everything works out in the end and everybody basically comes out unscathed.” Latifah once appeared on “Empire” during a crossover episode with FOX’s “Star,” a series that she is a regular.

Chicago Police Superintendent Eddie Johnson said last month that Smollett, 36, orchestrated a “phony attack” in order to take “advantage of the pain and anger of racism to promote his career.”

Kate Beckinsale gave a sassy response when a fan mentioned Pete Davidson after they were reportedly spotted cozying up at a party Sunday.

While Kate Beckinsale basks in the splendor of her fresh relationship with Pete Davidson, her ex-boyfriend, comedian Matt Rife, is urging the “Saturday Night Live” mainstay to watch out.

The funnyman told TMZ outside of the iconic Laugh Factory in West Hollywood he thinks Davidson, 25, should pump the brakes with Beckinsale, 45.

“Advice for Pete? Man-to-man… run,” Rife, 23, said before clarifying his remark. “Enjoy it. Enjoy it while you can – I hope they’re both happy and can build to where it’s an established relationship… I wish them both the best. I don’t have any solid advice, just be careful.”