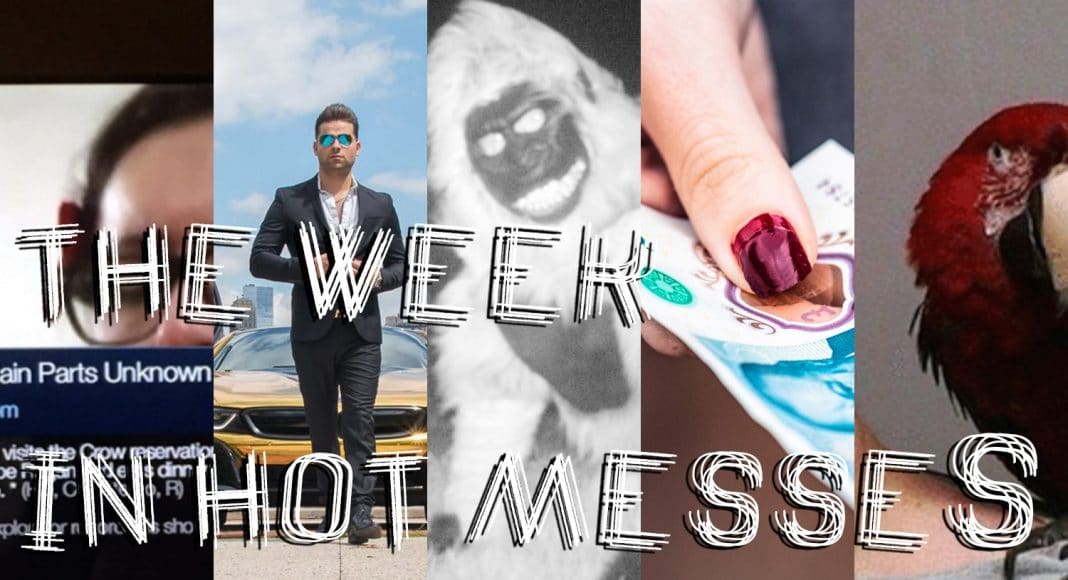 Welcome back to The Week in Hot Messes, a round-up of the wildest and weirdest news stories of the past seven days. This week we covered animal fat hidden in British currency, macaws posing for mug shots, drunkards in white gorilla suits, brazen ATM thefts, a heroic teenager busted for doing donuts in the parking lot of a police station, and more.

We’ll start with the heroic teen, who for some reason decided it was a good idea to do few donuts in his car in the parking lot of a Canadian police station while yelling obscenities at the no doubt baffled cops. Alas, the 19-year-old was arrested and is due back in court later this month.

Speaking of bold criminals, a man in Queens tied a rope around a gas station’s ATM and ripped it from the wall with his Jeep in broad daylight Friday morning. It’s unclear how much money the man made off with, but he remains at large.

We also covered a lot of animal news this week, including an apparently rare photo of two giant tortoises having sex. In less sexy animal news, the Bank of England found itself in hot water after animal rights activists and other concerned Brits demanded that the bank remove the traces of animal fat from its new £5 notes, which were just introduced in September. So far, more than 100,000 people have signed a petition protesting the notes.

In Kansas, a local police department heard rumors of mountain lion sightings, so they set up a couple of trail cameras near a local park. When they reviewed the footage, they didn’t discover evidence of mountain lions…but they did spot a handful of humans dressed as gorillas, Santa, monsters, and Big Foot posing for the camera. Not surprisingly, at least one of the humans appeared to be drinking.

Also, police in Oregon allowed a concerned macaw owner to pose for his mugshot with his beloved pet bird.