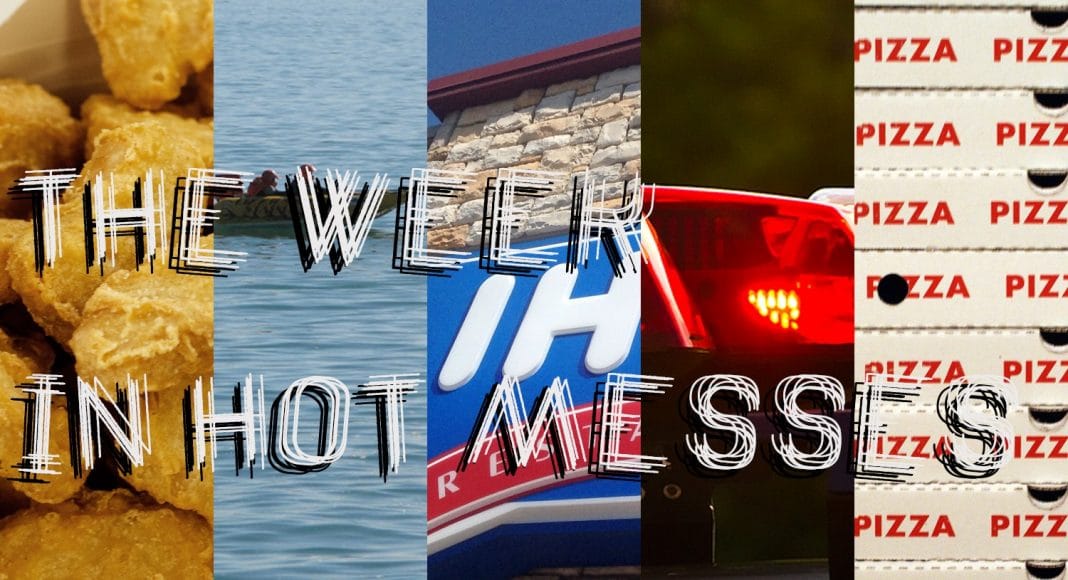 Another Hot Mess-filled week is in the books: Over the past seven days we’ve learned about jet boat-lovers Down Under, nude pizza bandits, Axe-chugging drunkards, irate IHOP customers armed with knives, and more. Let’s review the weirdest and most surprising stories below.

The week began with a deep dive into this history of insane lawsuits and complaints from McDonald’s customers, including a woman who called 911 after reportedly being denied the Chicken McNuggets she’d ordered, another woman who claims she suffered extensive oral injuries after biting into a glass-filled Chicken McSandwich, and a man who sued for $1.5 million after receiving only napkin with his meal.

Moving on to another popular chain restaurant, a man enjoyed a nice breakfast at a Miami IHOP last week. But sometime later, the meal apparently made him feel unwell, so he did what one does and returned to the restaurant to stab the waiter, who escaped with relatively minor injuries.

And in yet another restaurant story—food really brought out the worst in people this week—a man in Towson, Maryland broke into a pizza parlor in the early morning, stripped off all of his clothes on camera, and then robbed the cash registers. As of this writing, the nude pizza bandit remains at large.

In South Carolina, a man was pulled over after police officers repeatedly observed him swerving. When the officers approached his car, they spotted him doing something slightly suspicious…chugging AXE Body Spray straight from the can. Unsurprisingly, the man failed multiple sobriety tests and was arrested for suspicion of DUI.

The sole animal story this week took place in Maryland, where a 63-year-old grandmother was attacked by a bear while walking her daughter’s dog. The woman, who her husband described as a “tough babe,” said she punched the bear in the face several times before playing dead. Her quick thinking probably saved her life, though she still ended up with a broken arm and 60 stitches.

Finally, in New Zealand a father of two made the most of flooding his city and took to the water-covered streets in his homemade jet boat. “I was just going for a burn,” he said. “It had to be done.”

Sometimes you don't need stories with deep meaning or depressing facts. Sometimes all you need is a stream of photos of dogs on floaties...
Read more

Can You Sue If Someone Posts An Unflattering Photo Of You On Social Media?