The Fresh ToastThe most trusted name in cannabis
More
HomeCultureIf You Can Hear This Silent Gif, You're In The Majority

If You Can Hear This Silent Gif, You’re In The Majority

What do you hear when you watch this .gif of a transmission tower “jumping rope”? If you’re in the majority, you hear the tower land each time it jumps over the power line.

Does anyone in visual perception know why you can hear this gif? pic.twitter.com/mcT22Lzfkp

This entire discussion was sparked earlier this week when Dr. Lisa DeBruine from the Institute of Neuroscience & Psychology at the University of Glasgow posted the .gif on Twitter. She then took a poll on how many people had an audible reaction and, as of press time, the majority hear a “thudding sound.” 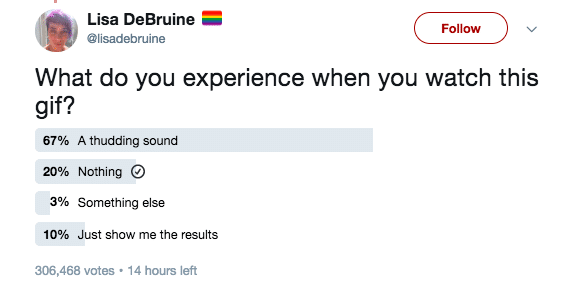 Happy Toast, which is responsible for creating the .gif, figured out that the “sound” some people hear is not necessarily tied to the towers:

The thump is almost entirely in the shake, if you crop out the pylons themselves you can still hear it. They just give it height. pic.twitter.com/3LZK1g24yZ

So, why do some people hear the thud while others don’t?

Dr. DeBruine told the BBC that she doesn’t know why some people hear it, while others feel it and some don’t perceive a thing. “Some deaf and hard of hearing people have reported all three perceptions, as have people with aphantasia” (a lack of visual imagery).

She adds, “I thought some of the vision scientists I follow [on Twitter] would be able to explain it right away, but it seems like there are several plausible explanations and no clear consensus.”

But there is one person whose reaction to the Twitter thread was quite useful. Chris Fassnidge, a doctoral candidate in psychology at London’s City University, tells the BBC that he suspects the phenomenon is related to Visually-Evoked Auditory Response.

This is the ability of some people to hear moving objects even though they don’t make a sound, which may be a subtle form of synaesthesia – the triggering of one sense by another.

We are constantly surrounded by movements that make a sound, whether they are footsteps as people walk, lip movements while they talk, a ball bouncing in the playground, or the crash as we drop a glass.

The ultimate answer to why only some people have this ability to “hear” silent objects still isn’t entirely clear. Fassnidge says what determines who experiences vEAR and how intensely “is probably individual differences in how our brain is wired.”

Facebook
Twitter
Linkedin
Email
Print
Previous article$10 Billion: North Americans Marijuana Spending Up 33% In 2017
Next articleThere’s A Reason Why One Armpit Smells Worse Than The Other