The Duke and Duchess of Sussex (aka Meghan Markle and Prince Harry) made it Instagram official earlier this week by joining the social media platform. And they’ve already broken the record for gaining the most followers in the shortest amount of time.

Markle, who deleted her personal Instagram account before marrying Harry, is back on, along with her now husband, under their professional handle: @sussexroyal.  Within less than six hours (5 hours and 45 minutes, to be exact) of launching the account on Tuesday, it amassed a million followers, landing it in the Guinness World Records.

“Welcome to our official Instagram; we look forward to sharing the work that drives us, the causes we support, important announcements, and the opportunity to shine a light on key issues. We thank you for your support, and welcome you to @sussexroyal.”- Harry & Meghan

According to the BBC, the royal couple beat the previous record by a landslide. It was held  by Korean pop star Kang Daniel, who landed the same amount of followers in 11 hours and 36 minutes back in January.

Congratulations to the Duke and Duchess of Sussex, Prince Harry and Meghan Markle, whose new @instagram account sussexroyal reached one million followers in less than 6 hours https://t.co/manigokiw5 🎉

The nine photos include special moments from their royal tour to Australia last fall, Harry’s work with the military and his conservation efforts with elephants, Meghan’s bond with the women of the Hubb Community Kitchen and her connection with the public.

The photo gallery caps off with a romantic, behind the scenes black-and-white shot of the couple from their Australian tour.

As of press time, the couple is only following 23 other accounts, including Princess Eugenie, Royal Marines, Kensington Palace and The Royal Family. 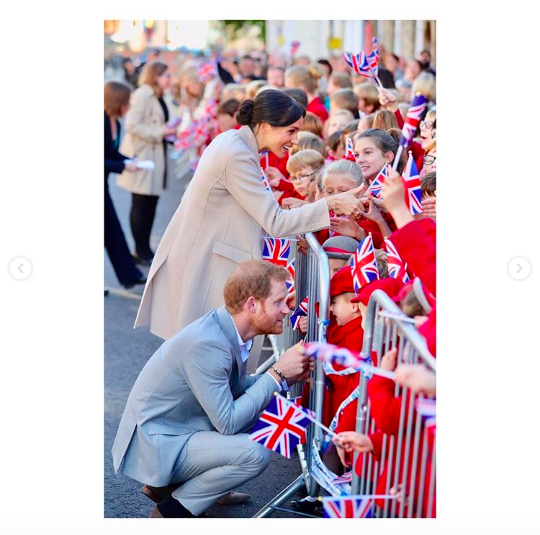 This new account means they are no longer entangled in the official Kensington Palace Twitter account, which, according to People, “now has a profile picture of William, Kate and their three children.”

RELATED: Some People Think Meghan And Harry’s Baby Will Break This Royal Record

The Twitter bio has also been changed to read: “The official account of The Duke and Duchess of Cambridge and the Royal Foundation, based at Kensington Palace.”

The couple is expecting their first child any day now, so we can only hope this new account will include some pics of the blessed child, like any other doting Instagram parents. Just not too many, though.

Facebook
Twitter
Linkedin
Email
Print
Previous articleThis Fake Boyfriend App Saves You From Awkward Moments
Next articleWhat’s A ‘Canna-Cure’ And Why Is It Beneficial?