We often turn to wine glasses for many things — to erase our day, to put us to sleep, to enjoy the company of others, to… anything, really. But British researchers turned to wine glasses, specifically their size evolution, to help explain why people are drinking more wine in England.

By comparing the measurements of 411 wine glasses from several sources, including eBay, the Ashmolean Museum at the University of Oxford, the Royal Household, historic catalogs from English glassware maker Dartington Crystal, and the John Lewis department store, they found that today’s wine glasses are nearly 7 timex larger than the ones 300 years ago. 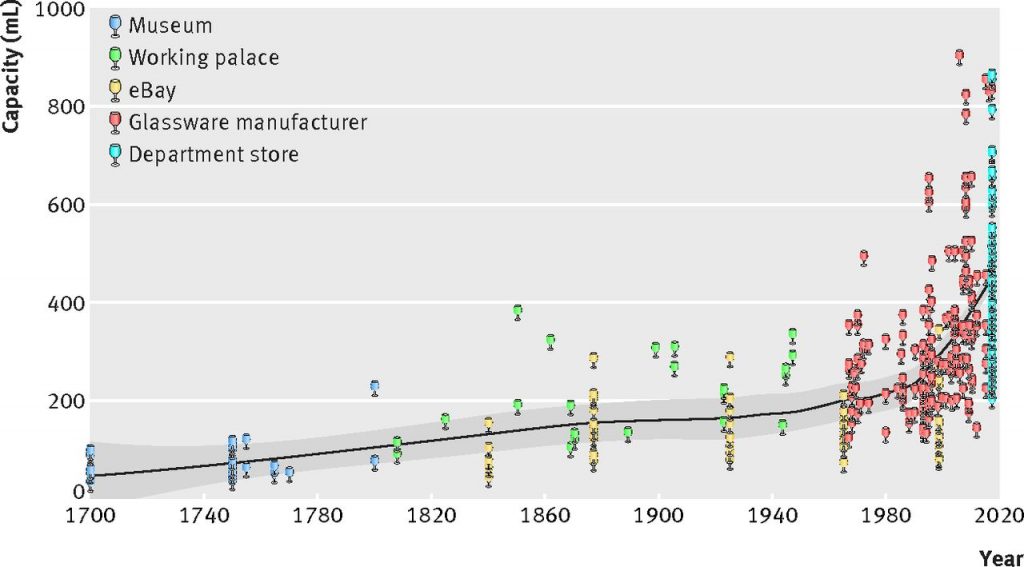 The authors of the study conducted by the BMJ (British Medical Journal) suspect the growing glass size could have something to do with the rise in wine consumption, along with other factors. According to the BMJ:

Increased drinking since the mid-20th century reflects greater affordability, availability, and marketing of alcohol products, and more liberal licensing has led supermarkets to compete. Environmental cues such as the design of drinking glasses—particularly their size—may also have contributed to increased drinking, particularly of wine.

Studying wine glasses’ capacity over time is an initial step in considering, firstly, whether any changes in their size may have contributed to the steep rise in wine drinking seen in the past few decades and, secondly, whether reducing wine glass size may help cut consumption.

Back in 1746, the “glass excise” tax was levied and eventually led to the production of small glassware. But when it was abolished a century later in 1845, glass production became more automated and, thus, larger in the 19th century. And, as the study astutely speculated, larger wine glasses have the potential to increase the pleasure of drinking wine, which could increase the desire to drink more. Yep, that all sounds about right. 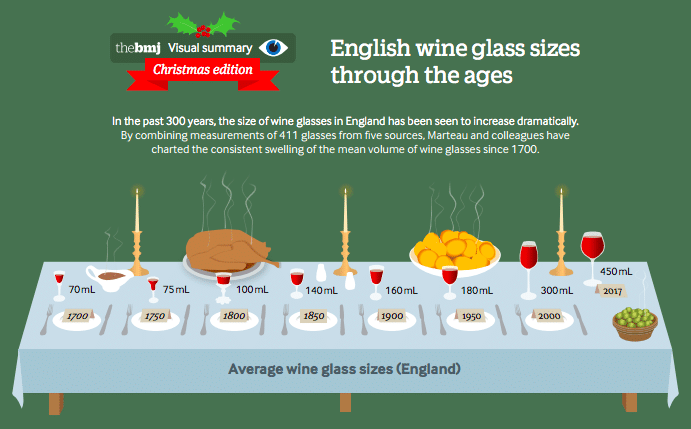 The study calls out two changes in the 20th century that likely led to even larger glass sizes:

Wine glasses started to be tailored in shape and size for different wine varieties, both reflecting and contributing to a burgeoning market for wine appreciation, where larger glasses were considered important. From 1990 onwards the US market’s demand for larger wine glasses was met by an increase in the size of glasses manufactured in England, where a ready market was also found.

Bars and restaurants are also thought to have helped skew glass sizes larger:

If wine sales increased when it was sold in larger glasses this may have incentivised vendors to use them more. Larger wine glasses can also increase the pleasure from drinking wine, which may in turn increase the desire to drink more.

The takeaway from this study and all of its glassware is that reducing the size of wine glasses across the board could reduce consumption. That seems like a conclusion even someone inebriated could have come up with.