10 Perfect Examples of How Scottish Twitter Could Save Social Media

For all of the trolls and other obnoxious, terrible people on it, Twitter still has some wonderful, mostly undiscovered corners tucked away that when occasionally stumbled up make the social media service seem like it might be half-way decent after all. One of those nooks is an area known as Sottish Twitter because, well, it consists of tweets written by people from Scotland.

What, you ask, makes a tweet written by someone from Scotland so special? Here’s a perfect example about a random encounter with a nice sounding couple.

Just seen a bird shoutin at her bairn to put his pants on then pointed at me sayin 'look the mans gonna steal ur willy'. Wtf no am no

What is it about the tweet that’s so hilarious and perfect? It’s hard to pin-point exactly but we’d really rather not dig too deep anyways; instead, we feel it’s best to just enjoy Scottish Twitter on its own, without giving it too much thought. Here are nine more classics from the genre.

On the troubles of shopping:

On TFW Your “Maw” Buys You the Wrong Kind of Soap

On the Struggles of Modern Day Romance 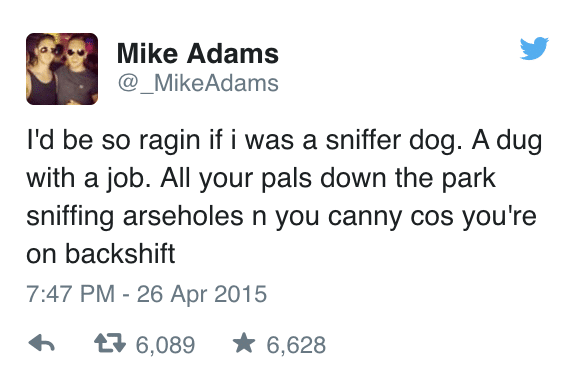 On Tributes to Lost Family Members

On…Well, We’re Not Really Sure What This One Is About But We Like It

Do Ann Summers actually ask if yi want a bag?

On A Nice Night At Home By Yourself

On Owning Your Mistakes

On Properly Appreciating Your Mother