The Fresh ToastThe most trusted name in cannabis
More
HomeCultureThis Bride Is Freaking Out Over Her New Last Name For Good...

There are a lot of things to be stressed out about when you’re planning your wedding. Venue, photographer, bridal party, and guest list alone can keep a bride-to-be up at night. But a last name? That shouldn’t be among the things that get you spinning.

However, one woman is in turmoil about her future last name, something she’s had nearly a decade to consider. You see, her first name is the same as her fiancé’s last name: Shannon. And while Shannon Shannon may have a ring to it, it’s not ideal for anyone.

Last week, she posted on wedding forum Weddingbee to ask for help. 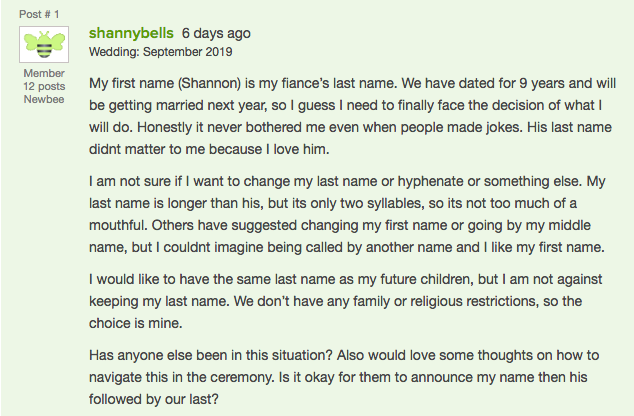 My first name (Shannon) is my fiance’s last name. We have dated for 9 years and will be getting married next year, so I guess I need to finally face the decision of what I will do. Honestly it never bothered me even when people made jokes. His last name didnt matter to me because I love him.

I am not sure if I want to change my last name or hyphenate or something else. My last name is longer than his, but its only two syllables, so its not too much of a mouthful. Others have suggested changing my first name or going by my middle name, but I couldnt imagine being called by another name and I like my first name.

I would like to have the same last name as my future children, but I am not against keeping my last name. We don’t have any family or religious restrictions, so the choice is mine.

Has anyone else been in this situation? Also would love some thoughts on how to navigate this in the ceremony. Is it okay for them to announce my name then his followed by our last?

I know this isn’t traditional, but considering the circumstances, have you two considered your maiden name becoming the family name? My mom has a month name as her first and last name (not the same month, luckily!) but she has always hated being the butt end of jokes about it, and has said before she wished she had kept her maiden name. Mainly beause people make so many comments on it. Would he be against changing his name?

If it were me I’d keep my maiden name and name my children his last name.  It’s a unique situation.  Unless he wanted to change to mine.

Hey! This is your opportunity yo necome like Cher or Madonna…. just be Shannon! LOL On a serious note.. I would kuat keep my maiden name.. or if he wants to switch to your last name that is cool too.

Just as many chimed in telling Shannon she should have her husband take her last name, especially in this age of feminism. Others suggested she just embrace the double name:

I don’t personally see a problem with being “Shannon Shannon” – I think it’s kinda cool and would jump at it.

In the end, Shannon seems relieved to have received so many suggestions, thanking everyone for their opinions on the topic, saying, “Never thought it would get this much attention. I have so many options and I appreciate everyone offering so many different opinions and opening my eyes to lots of options. I have some time to think on what I will do.”

Did she just say “I do?” We’re already half way there!