We’ve all been to a boring wedding. And Noah Nicholls found out the hard way that if you’re going to fall asleep during the ceremony, don’t be standing up while you do it. If a man falls during nuptials and nobody is around to hear it, does he make a sound?

As a groomsman at his friend’s wedding, Noah decided that he was going to take a little nap during the pastor’s 40-minute speech (40 MINUTES!) and went down like he just heard someone yell, “timber!” The video is insane to watch, but Noah is okay. So okay, he took to Reddit to share his story and laugh about the ordeal (as much as a  person can laugh with a messed up mouth).

Pastor said he was going to give a ‘quick’ 20 minute sermon that became 40+ minutes. I had a terrible breakfast and next to no sleep, I locked my knees and shortly after woke up on the floor. I broke my nose, dislodged my front teeth, and messed up my jaw pretty bad.

When someone sarcastically called the bride an “Attention whore!” Noah responded, “Yeah….the bride was giving her vows so I had to step in.” He also shared a photo of his shattered face.

“This is me about an hour after it happened.” 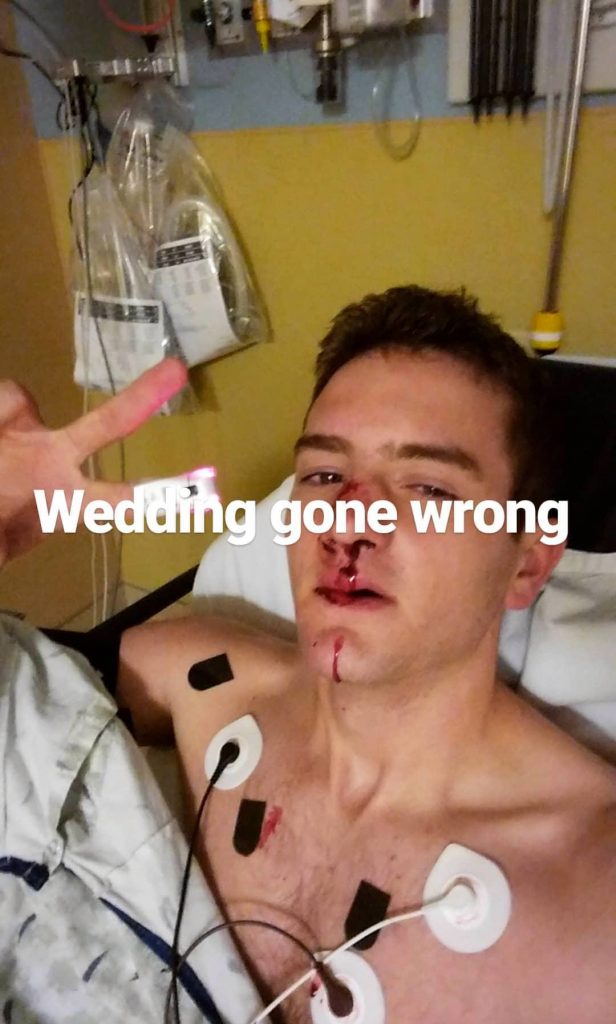 Let this be a lesson to future brides and grooms. Your wedding needs to be quick, like, “I do” a virginal kiss and a victory lap down the aisle. Everyone just wants to get on with the reception and drink. Hopefully, the rest of the wedding party poured one out for Noah. We see you, buddy!

Here’s the cringeworthy video. Noah gets a 10/10 for form.

Facebook
Twitter
Linkedin
Email
Print
Previous articleVIDEO: How To Use Amazon Prime To Help The Homeless
Next articleThese People Believe Earth Is Hollow, Filled With Aliens And Nazis