7 Reasons Why Barack Obama Is Our Foodiest President Ever

When Obama leaves office, he’ll be creating a void that’s never been felt in the wake of another president: an appreciation for good food.

The New Yorker recently wrote about what Barack Obama has done for food and besides the obvious implementations of healthier eating and nutritional information requirements at schools and chain restaurants, the man is just as comfortable around foreign delicacies as he is around burgers and hot dogs. Yes, he is kind of a health nut, but he’s also a foodie (with a weakness for pub grub). In honor of his debunked 7-almond habit, here are seven reasons he will be remembered as somewhat of an epicure.

1. He loves nachos
In the premiere episode of Season 7 of Comedians In Cars Getting Coffee, Obama joined Jerry Seinfeld at the White House where they drank from a Mr. Coffee and talked about mundane everyday things, like the President’s underwear drawer and what his food vice is.

Jerry: “Even though you seem very relaxed, you gotta go off at some point with food. What’s your thing?”

Obama: “Nachos! that’s one of those where I have to have it taken away. I’ll have guacamole coming out of my eyeballs.” (see, that’s him below, pointing to his eyeball). 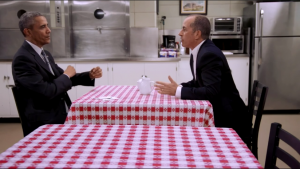 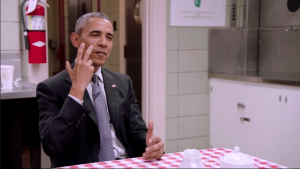 2. He impressed Anthony Bourdain with his ramen skills
In Sunday’s season premiere of Parts Unknown, Bourdain and Obama keep it chill by having a casual meal in Hanoi, where Bourdain comments on the President’s vermicelli noodle aptitude:

It takes some skills to handle these sticky cold noodles, but whatever your opinion of the President, he has those skills.

3. He uses food snob words like ‘arugula.’
Obama caught a lot of slack in 2007 when he dared utter the word “arugula,” when referring to high prices.

Anybody gone into Whole Foods lately and see what they charge for arugula? I mean, they’re charging a lot of money for this stuff.

5. He has a taste for organic tea
One of Obama’s favorite drinks is organic Black Forest Berry Honest Tea. An Honest Tea rep told the New York Daily News that he even keeps a stash on the official presidential helicopter.

6. He’s a trail mix connoisseur
In his memoire, Obama’s former right hand man, Reggie Love, noted that he once upset Obama after accidentally buying him the wrong trail mix before a flight from Washington, DC, to New York City.

The senator opened the bag of trail mix I’d bought and proceeded to pick out every M&M, holding them all in his palm like pieces of candy-coated toxic waste. ‘I’m not going to eat these,’ he said while pushing his hand in my general direction.

Why do I get the feeling Love uttered this phrase a lot:

7. He likes fine mustard
The New Yorker points out that Sean Hannity once dubbed Obama President Poupon after he was spotted ordering a hamburger with the “fancy” Dijon mustard. What an elitist!

Bonus: He loves a bustling restaurant
During their Hanoi trip, Obama told Bourdain that he misses the days when he and his First Lady could walk into a restaurant and not be immediately shuffled into a private room. He enjoys the energy of a full dining room.

Consume is an essential source for food and beverage news, trends, tips, original recipes and everything in between. Want to read more? Try these posts: How To Make Sure Your Food Doesn’t Explode In The Microwave, 11 Annoying Things About Menus, 6 Ciders That Will Make You Rethink Beer.

Wine is associated with many health benefits, but people who suffer from this medical condition might want to avoid it.